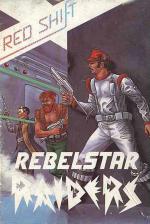 Two-player tactical combat with three scenarios - attack/defend Moonbase, Space-ship and Final Assault. Each player controls up to 30 characters with individual names, characteristics and weapons. The complex instruction booklet is easy to follow, but what does reference to expansion kit under LOAD mean?

The scenario is a floor plan; men can be moved by key selection in eight directions. In deploy mode, the man's name and weapon is shown and sometimes men or sites are pre-set.

Battle commences, each player moving men and using weapons in turn until their abilities are exhausted or the turn is ended. Abilities are replenished on your next turn - cheats get double turns by entering 'end-turn' code twice. You may move over your own or your opponent's men, obtaining details of weapons, armour, skill, wound endurance, plus probability of hitting target and cost.

Best played with full understanding of your men's abilities, it can still be enjoyed on a novice level by deploying and bashing away. My test opponent, boasting gleefully throughout, only escaped defeat by plug-pulling. Good grahics and very absorbing.