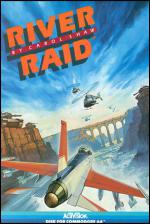 The action takes place on the River of no Return, and you have to steer a small jet fighter up the river, trying to penetrate the defences of a hostile force. The screen shows a bird's eye view of the river which scrolls from top to bottom in smooth animation. Enemy units include tanks, which may be on land or on a bridge and sometimes fire shells, hot air balloons, ships and helicopters.

Your aim is to get to the next bridge and destroy it. Several starting points may be selected, and one or two players. The river gets more difficult to negotiate after each bridge and at level 50 is impossible - well almost.

I liked the graphics, very colourful and well defined, and the sound is also good. The actual game can be a little tedious after a while. There is no variation in the tasks you have to perform i.e. pick up fuel, blast the enemy.

The action is fast and hard and should please any arcade fans.

The action is fast and hard and should please any arcade fans.