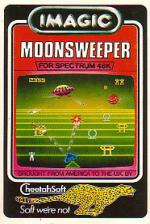 Am I at home or at the Silver Dollar on an arcade machine? Moonsweeper left me breathless with its brilliant graphics, sound, fast action and addictability.

Loading takes one minute 45 seconds and gives an introductory screen of a waving spaceman with you reflected in his helmet. Your task is to find stranded lunar prisoners on four moons, guarded by hostile Base Carriers, Short Range Interceptors and Death Towers.

First, you must avoid the meteors - exploding them raises your score - and land on a coloured moon. You skim along the surface - shown by radar lines coming towards you - destroy hostile forces and pick up six pioneers. Then you must zoom through the lines to gather speed for take-off to the next moon.

There are four levels of difficulty and options for one or two players, sound on/off and reset game. The program is compatible with the Cheetah RAT, Kempston and Interface 2 joysticks. 'Up' increases the speed over the moon and 'Down' activates defence shield in space, slows down speed over moon or allows firing above moon level.

Cheetah has a winner!

Compatible with the Cheetah RAT, Kempston and Interface 2 joysticks... Cheetah has a winner!