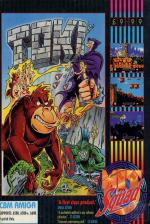 Toki, who started out life as a Chippendale, wants to prove to his scantily-clad girlfriend that he's managed to stop smoking. She has, but if her tortured gesticulations are anything to go by, she's suffering for it. [Serves her right - Smug Ed] Just as he reaches her, a deadly nicotine patch cast at him by the evil wizard Nicobrevin hits him full in the chest. The nicotine overdose stunts his growth and turns him into a kind of mud-brown James Whale clone with a breath problem.

Awakening from the transformation, he finds that his girlfriend's split. Has she sneaked off for a quick puff? Well, that's up to the audience to debate and Toki to find out. What a strange audience they are, too - spiders, gorillas, pterodactyls and more. Pretty much standard James Whale fare, then. True to the nature of this strange hybrid Toki/Whale-beast, hapless passers-by get stomped and breathed on and generally beaten up.

As for othe redeeming qualities, forget it. There aren't any. If this game was a book, it would be Mills and Boonish and start off with an opening sentence such as "His scorching eyes branded her heart with a flame of desire". As far as I know (I'm only a new boy), we don't have a word in the office for a game which in musical terms would be called muzak. But muzak this is. The graphics are nice, pretty, colourful and so on and so forth. The scrolling is nice and smooth, with no hiccups, snatches, jerks, pull-ups, snares or other snags.

By now you may have guessed that the highest accolade this game could manage would be to be called standard fare. That's exactly what it is. A seasoned platformer could complete all six levels of "high powered action" (snort, snort) in less than a day. Probably, if you've got a spare tenner and don't fancy donating it to the Amiga Power benevolent fund then this game may not be for you.

Completely ignore all of Steve's review above. Toki is a brilliant coin-op conversion. Steve wouldn't know a good game if it bit him on the toilet. Don't worry, we'll 'have a word' with him.

A brilliant coin-op conversion. The graphics are nice, pretty, colourful and so on and the scrolling is nice and smooth, with no hiccups, snatches, jerks, pull-ups, snares or other snags.