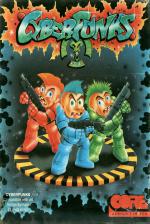 Cyberpunks | The Bottom Line | A1200 Version 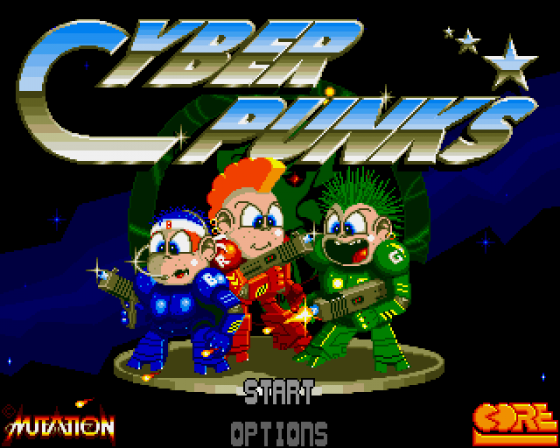 Imagine a sort of bizarre cross between Rodland and Alien Breed. Only not quite as good as either of them, sadly

The problem faced by any good idea is that it can't be copyrighted, made secular, or specific to any one group. That's what's happened with the 'cyberpunk' brand new. It captured the public imagination. Before you could say William Gibson, Bruce Sterling or Neuromancer, a marketable commodity, worth ringing the last affected fetishistic, industrial-techno pennty out of, was born.

Inevitably, we ended up with the die-hards crying "No, no, we're the cyberpunks, the rest of you are only playing at it." The image, excitement and cultishness fades and dies, and only the sad unimaginative mass-market consumer types out there remain happy with the cyberpunk association. 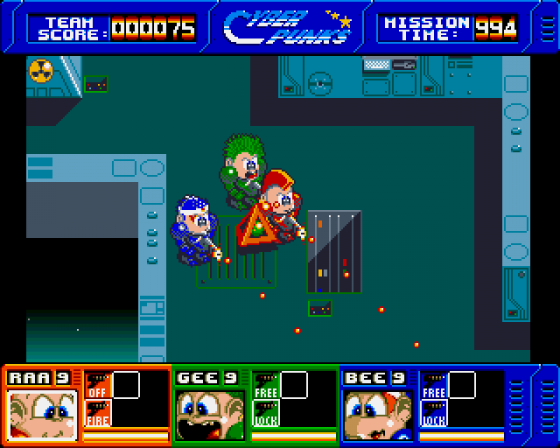 So anyway, after the stern talking to we received from Colin The Publisher last month about extraneous expurgations in our reviews, we'll start discussing this new game from Core: Cyberpunks.

It's one of those run-around-a-huge-maze killing-things-and-collecting-things and-remembering-things-while-trying to-reach-an-exit-before-the-time-runs-out, er, things. In fact, there's a whole load of thingy things going on. It's likeable but not loveable. And, er, that's it. [You're explosively combusted, Steve - Ed]

Okay, okay, I'm sure there's more to be said that's interesting about Cyberpunks, but it really is starting off at a disadvantage by calling itself that name. The main protagonist hero types - Raa, Gee and Bee - are nauseatingly cute little cartoon characters. They bear more than a passing resemblance to the infamous miniscule American cartoon character 'Space Boy'. Their bipedal motion resembles the infamous Dave Green full-of-life schoolboy walk. Except for the fact that Raa, Gee and Bee run faster than Dave has ever moved in his life. Perhaps they are related. [Back to the review, please. - Dave] 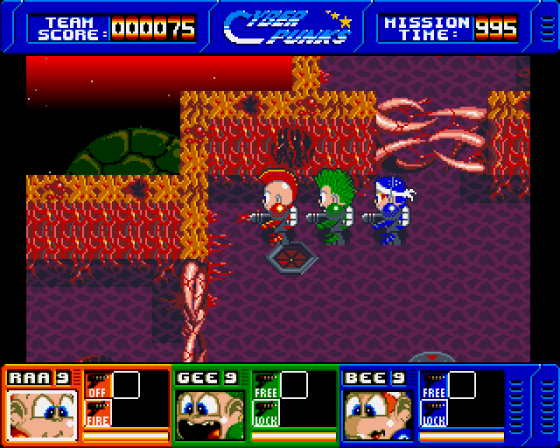 Our terrible trio are a clean-up crew in space. A sort of 'Alien Busters' (who you're gonna call). The whole game consists of five missions. Translated into gaming speak, this means that there are five huge levels, each with sub-levels in them, which have to be dealt with, punished and pacified in turn.

This is no mean feat considering that much of the space complexes are guarded by an assortment of aliens, robots, monsters and the like. Travel between the sub-decks (levels) is by lift. Travel around any one deck is by foot or teleport. All of this can be rather disorientating. Luckily, there are several fiendishly helpful devices that you can call on for help. For the purpose of navigation, you basically have to have a good memory, but there is a cop-out option whereby you can 'log on' [Er, shouldn't that be 'jack in'? - Conscientious Cyber-Ed] to one of the several terminals randomly dotted around the space complexes. To log on, you've got to have a disk. There are four different colours of disk. Depending on the colour of your disk, you will be allowed access to several options, each of which is helpful in an, er, helpful way. The blue disk lets you view the deck blueprinters. This brings things back into perspective when you start losing your temper on discovering that you've just entered a particular room for the fifth time.

Presumably, the inspiration for the name of the game came from the option to log on to computer terminals. Part of the log on text sequence has the line "Welcome to the Matrix series 1000 CPU". Everybody knows that a proper cyberpunk matrix looks something like "Lines of light ranged in the non-space of the mind, clusters and constellations of data. Like city lights receding...". So why is the visualisation of 'jacking-in' a boring old tele-type printout which you can't even jump out of by pressing the fire button? Tedium in extremis. Although it may seem like a trivial point, the game-playing process shouldn't be interrupted in full flow by such an insignificant (and unavoidable) mechanism. 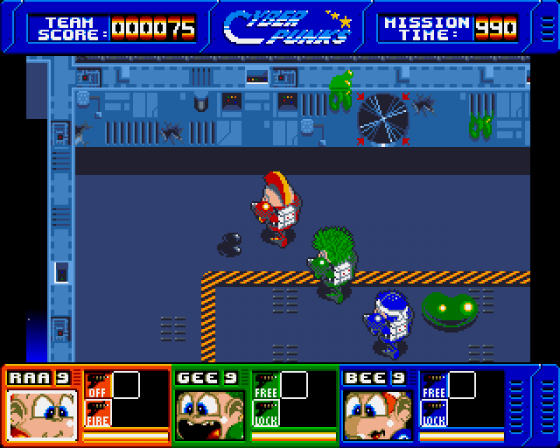 Aside from the criticism, this part of the game is strategic and a must for successful completion of any level. So far, I've only discussed one disk colour. Red disks allow you to access the Holographic Generator. This ingenious invention lets you choose from a list of power-ups. The most useful will depend on your current situation. The options are: Force Field Key Circuit, Full Energy Pack, Party Shield Orb, Time Distortion Cube, Smart Bomb Unit and Auto Sentry Pack. In fact, apart from the extra weapons, these are basically all the power-ups that you're likely to come across in the game.

I'll not talk about each one - after all, some of them are self-explanatory. The Time Distortion Cube lets you stop your 1,000 second clock by about 15 seconds. It doesn't sound like much, but a few of these can make the difference between completing the level and having to start all over again.

The Auto Sentry Gun is an idea borrowed from Aliens: Special Edition (the movie) and Hired Guns (the game). It doesn't last forever, but it will kill anything that tries to creep up behind you. And that brings us quite nicely along to the control system. 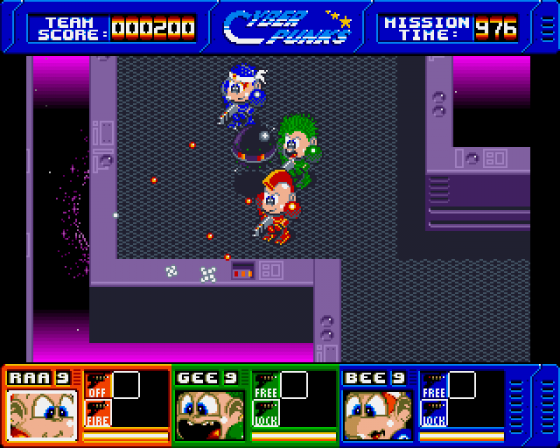 The control system is rather confused. It has some nice little touches and some thoughtless ones. Your three little men follow each other in a line. If you choose to turn round sharply with your leader (Raa), the other two follow in his exact footsteps. This is handy when, say, the inventory of one of the characters is full but you've got a power-up you want to pick up. So long as you walk over it with Raa, it will get picked up (assuming you've got a spare slot with at least one of the other characters).

The irritating aspect of this 'follow the leader' hierarchy comes to light when you try to get away from an alien with a quick 180-degree about-turn. The guys at the back just about always get hit and can take quite a bit of damage.

The particularly nice touch is the ability to have your men fire in independent directions from each other. This is selected from the same little panel as the inventory display. Either 'free' or 'lock' gets them positioned as you want.

So while winding down, I'll discuss the game's gestalt (wholeness) factor. It's relatively well put together. It's a comparatively simple, not-too-exciting explore-a-maze-and-find-the-keys-for-access-to-closed-doors theme. The soundtrack adds a bit of atmosphere - it's spunky and lively and can draw you in, in less lucid moments.

So there it is. Cyberpunks will appeal to the ideologically bereft and those people unchallenged with imagination. Considering that it comes on only one disk and doesn't offer anything significantly different from a similar ZX Spectrum or C64 game, I would consider it a tad overpriced for the market it is aimed at. The best description for it would be "Hired Guns for ten-year-olds".

Downers: The gameplay quickly becomes dull unless this is the type of offering that you particularly prefer.

Still can't work out why it was called Cyberpunks. Maybe it was something to do with it being outdated, sanitised and ultimately boring.

There's no difference that I could spot between the two versions. But the sneaky parallax scrolling still looks nice on both.

Cyberpunks | The Bottom Line | A1200 Version

I can't work out why this is called Cyberpunks. Maybe it's something to do with it being outdated, sanitised and ultimately boring. 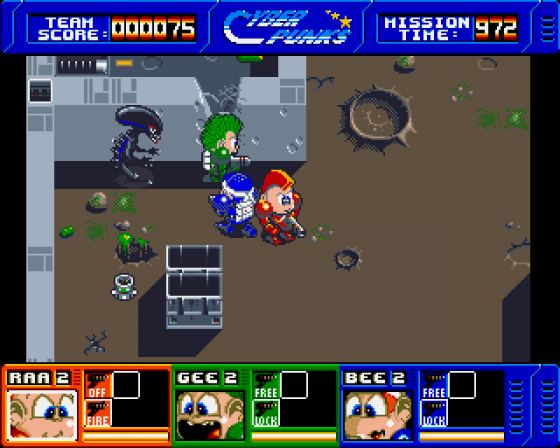