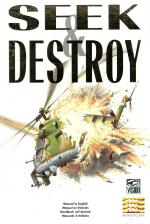 Seek And Destroy | The Bottom Line | A1200 Version 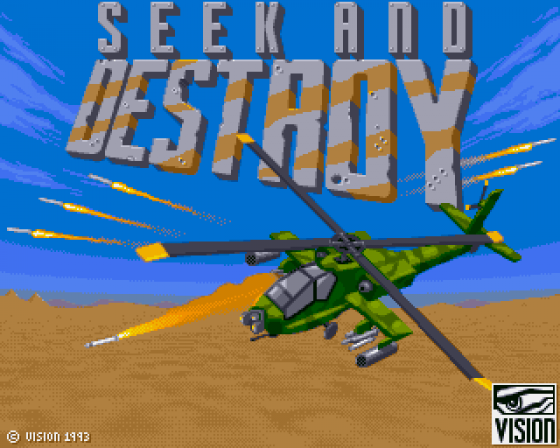 It's this month's obligatory helicopter game! It's viewed from above, it scrolls in every direction, and, just for a change, it features the Apache!

Attention! You have just entered a non-protected review area! Your full co-operation is required by military law!

You've got to hand it to the American Defence Machine. They are the leaders in design, development, production, maintenance, upgrade, refurbishment and support. For every military encounter, whether it be global conflict, local skirmishes, South American drug-runners or plain old Somalian rebels, they've got a fast tactical response piece of combat hardware specifically designed for the job. 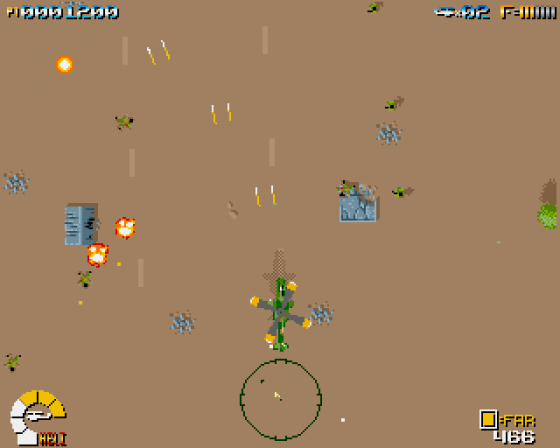 Your mission is to pilot an Apache Helicopter in a Nintendo Mode 7 circular motion simulation exercise, with each mission becoming progressively more difficult. So difficult, in fact, that game-hardened psychopathic types who complete civilian games quicker than it takes to pull on a pair of cellophane fatiques, will start smiling knowingly.

The principles of war do not change. The commander who employs surprise, manoeuvre, mass and economy of force faster and smarter will dominate his enemy. And you can't get more economical, faster, more forceful or faster than a battle helicopter. In short, you've got to: See First, Shoot First and Survive. That's where your first advantage lies. 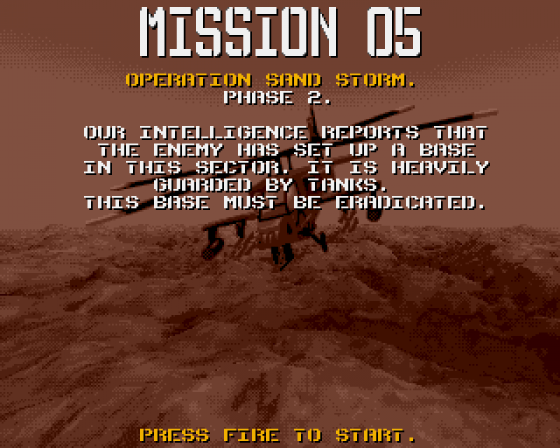 The Apache helicopter was built for the fast lane. Smart, flexible and proven in the field. The only attack helicopter to be called "the workhorse of low-level high-payoff hovering aviation". The rotor-blade-to-air horsepower-to-weight ratio is excellent for those spin-round 'overkill' shoot-and-slaughter manoeuvres. For today, tomorrow and the next mission on disk, the Apache is all you have and all you need for the role of 'fighter/attack' neutraliser of enemy combat systems: buildings, armour, rocket launchers and anything else that moves.

In order to fulfil the first principle (See First, Shoot First and Survive, generally referred to as SFSFS or Esselfesseffas) your Apache is equipped with a DAV (probably an Electronics Space Corps DAV product) Warning and Surveillance System. This neat 360-degree coverage compact module enables you to detect, classify and identify air threats and ground targets. Not only that, it locates hostile helicopters at safe distances. It works in all weathers and over most forms of terrain. Although the game doesn't have any weather as such, which is a shame really. It's set in a desert, snow, water and jungle terrain, randomly scattered with Charlie. No no, sorry, I mean, 'hostiles'.

The first mission is relatively easy. You always set out from a home base helicopter pad to the cheerful pseudo-authentic tones of an Australian-American accent: "Apache One, you are clear for take-off". You will, however, find yourself suffering from termination fatigue until you're competent enough with the control system. Top Tip: as soon as you can complete Mission One using only the chain gun and without suffering any damage, then you're well on the way to successful Apache-ing. 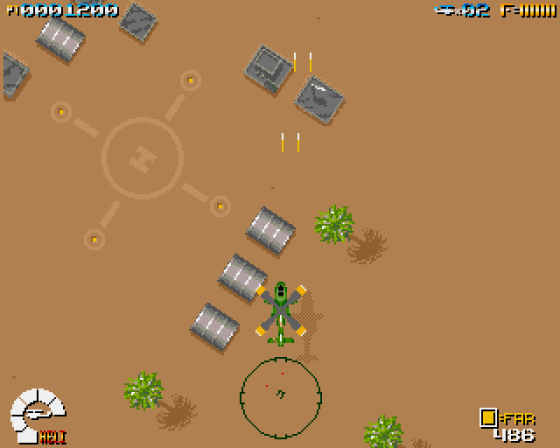 Now that I've mentioned the chain gun, it seems like a good time to discuss the weapons systems you have at your disposal. There are six in all and you select them using the function keys.

With the exception of the first two systems, we'll go through them in sequence. The most useful of the systems and the one you'll use most often is the FFAR (Fire & Forget Air Rocket). You generally only have 500 rounds to play with on each mission, so it pays to be economical. The beauty of these missiles is their ability to hit ground targets and air targets. Their damage coverage is pretty wide, anyone or anything in a relatively broad area is fatally compromised.

The Chain gun is the only weapon system that offers a limitless number of rounds. Use it against personnel and buildings only. It can neutralise self-propelled anti-aircraft guns, but this usually involves hanging about in the air too long for comfort. 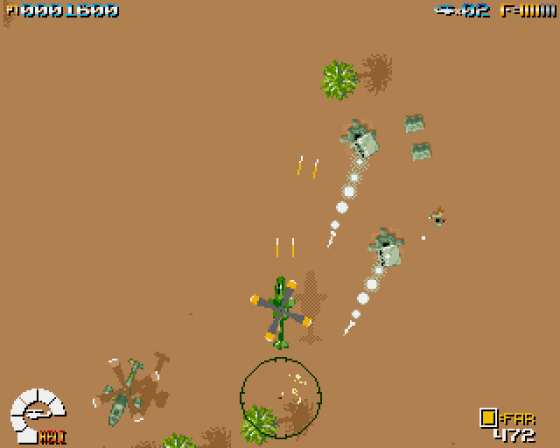 Air-to-air intercept missiles. This system automatically tracks hostile aircraft and a hit is virtually guaranteed once you fire. Notice that I said a hit is almost guaranteed. Not a kill. For this reason, and this reason alone, it is often more preferable to shoot enemy helicopters down using the FFARs.

Air-to-ground: These can be great fun assuming the tracking system chooses the target you intended. There is nothing more annoying than your sight alighting on a hangar or a building when there are anti-aircraft systems on the ground. It's usually best to take out all of the anti-aircraft missiles and mop up the loose buildings with the chain gun.

Air Strike: These are incredibly useful when you come up against a clump of highly armoured attack vehicles. Call up an air strike and see everything in a small area disappear. I'll break ranks at this point and mention the game's sound. The sample used for the air strike is particularly poignant; a high velocity roar of power, death and destruction. You almost feel sorry for your silicon pixellated enemies. 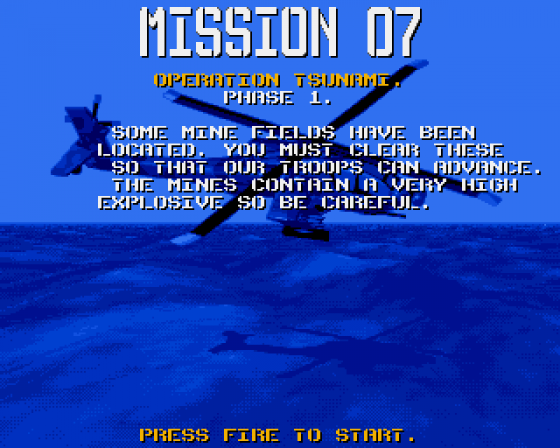 Napalm: Ah, I love the smell of napalm in the morning. Now you can use it on whoever or whatever you want. This is the sort of thing we want in games - much more reference to and, what the heck, use of a weapon that sticks as it fries as it kicks.

So that's the weapons systems dealt with. They are just about your only help in a hostile world. Use them wisely and you will be rewarded.

Fuel and shields can be replenished with the icons that appear when you destroy buildings although, annoyingly, you have to land on them to do this (the weapon replenishment icons only have to be flown over). The game is difficult enough without this adding to the torture. There is nothing worse than being down to your last segment of shield, trying to land on the shield icon and ending up being shot by a hostile. 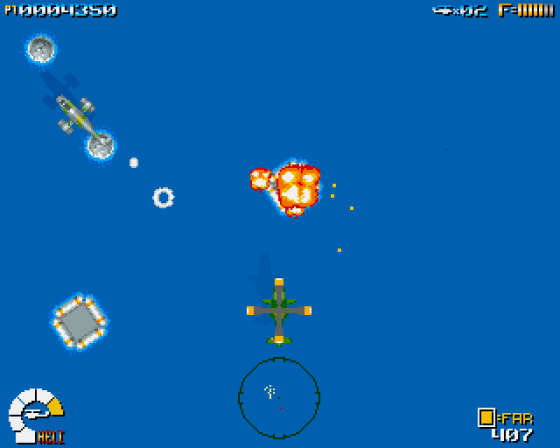 So now that we've got here in one piece, it's time to summarise in a hundred or so words.

Because of its theme, it's always going to be compared to Desert Strike which... it's not as good as. It doesn't have the depth or the atmosphere. The graphics are functional and could be more exciting. The sound is nice, although the sample quality could be better. The gameplay is difficult - it's not a game you can just cruise through. Having struggled with it for nigh on a week, I can only conclude that game champions and determined people are going to love it. The enemy really are as hard and resolute as you.

In a sentence, Seek And Destroy isn't going to explode onto the game scene with any great impact but it will hover about and make slow advances.

Downers: Dull graphics. Could almost be a PD game. Difficulty factor (depending on your gaming ability it's either an upper or a downer).

A better than average shoot-'em-up which should please those who find most games around too easy.

Aside from slightly smoother scrolling and screen update, there is no discernible difference between the two versions.

Seek And Destroy | The Bottom Line | A1200 Version

A better than average shoot-'em-up which should please those who find most games around too easy. 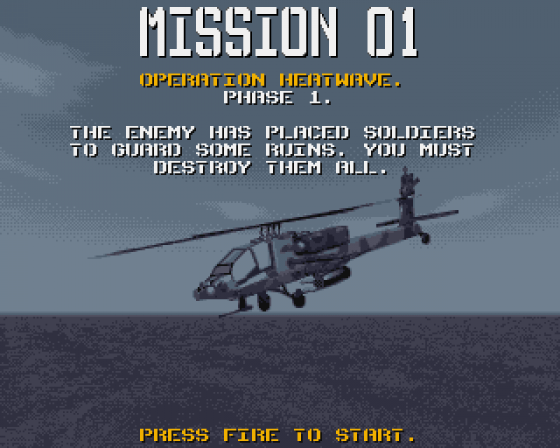 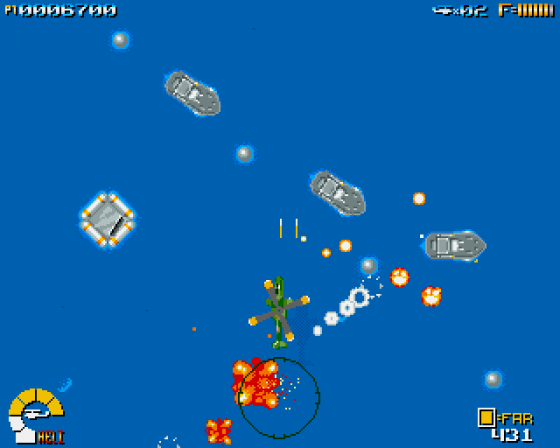