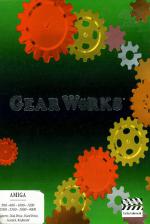 It's a new cog in the puzzle-game machine. But does it offer enough to really get your teeth into? 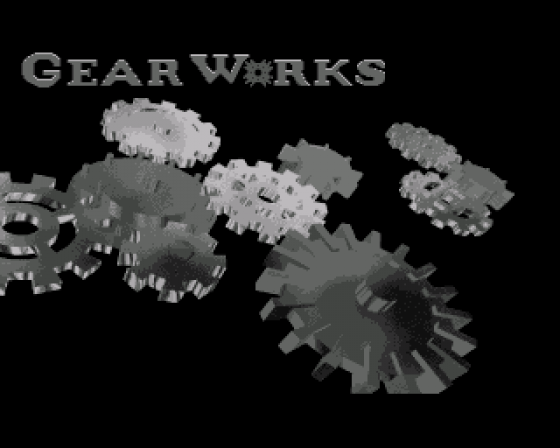 One of the fortunate aspects about working on a magazine like Amiga Power is that you get the chance to see lots and lots of games. Not just Amiga games, but Sega, Nintendo and PC games as well. In general, the majority of games all share one thing in common - they don't cut the mustard. For each genre, there is an iconic star floating like the sun in a miasma of dark, unfriendly shadows, e.g. Formula One Grand Prix in the racing car simulation stakes or Desert Strike in the shoot-'em-up department.

Occasionally, a real novelty brain-jack of a game turns up which defines its own genre. In this case, Tetris immediately springs to mind. Despite numerous attempts, Tetris has still never been bettered. Ingenuity inspires imitation. Not necessarily plain old copies, but real live games in their own right. One of the better Tetris derivatives was Klax. Fast, furious and better looking, it never quite caught on with the net of Tetris devotees, despite several conversions.

So what's all this got to do with Gear Works, Hollyware Entertainments' offering from John-Major-land in Huntingdon? Not a great deal in a direct manner. It's an innovative puzzle game based on varying sizes of gears which link up to each other in various different fashions. In this instance, there are three separate sizes of gear. "Strike me down in a vat of sour milk if that isn't a large number," I say, in a totally incredulous kind of manner. 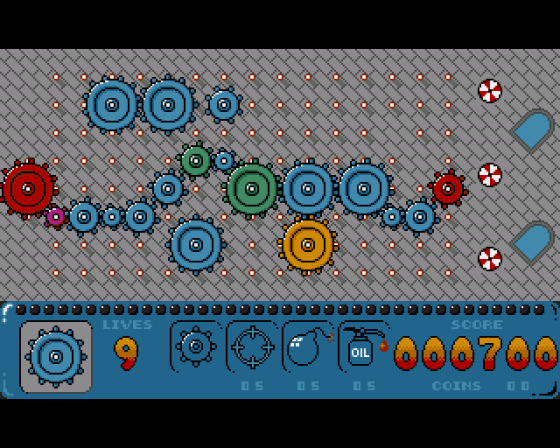 The aim of the game is to set up a chain of synchronised free-moving gears to link up all of the red cogs positioned on the screen at the beginning of each section. All this gear-turning needs an engine to drive it. Gears cause friction and inevitably the engine heats up. If the engine gets too hot, you lose a life and have to start again. Okay, the engine is just a cheap-shot attempt at pretending that you aren't under a time limit. But you are, and it is. A timer, that is. Each screen consists of varying numbers and patterns of pegs. You hang your gears on the pegs which diminish in number as you progress and consequently forces the type of gear that can be placed in certain positions. Sounds joystick-tremblingly good, eh? Well, there's more than that to get to grips with.

As if the engine overheating and peg limitation weren't enough, there are two cutesy little monsters who do less than their slacking best to hamper your progress. They're known as poffins (probably due to legal difficulties with the large and well-respected book publisher of a similar name), and one takes it upon himself to knock pegs off of the screen. Some pegs are crucial to the successful completion of a section. If he knocks them out, you'll probably end up casting doubts on the legality of his parentage. The other poffin, meanwhile, tries to rust up the smooth running of your gears. If he succeeds, you'll lose some time (sorry, your engine heats up some more). The poffins can be dispatched by two means; shooting or placing a gear on them. You're normally better off just placing a gear on them, though - shooting them is just too involved, and loses too much time.

So far, so indifferent. Is Gear Works up to scratch in today's fast-living, overly-stimulated, market-driven society? Well, put simply, it could have been. Look at the clue in this paragraph, round about where the word 'market' is mentioned. In today's world, we are not numbers, we are commodities. Albeit living breathing mone spending commodities. But we aren't totally stupid. If you want to sell something to us that isn't a body-functioning essential, you've got to know who your target audience is. To find this info out, you've got to engage in a practice known as market research. [Hello. We apologse for this interruption to your review. Normal service will be rescumed as soon as we get Steve to tell us that the sodding heck he's wittering on about! - Ed] I'll give you an example of how the research part operates. The look of Gear Works remainded me of an early Commodore 64 game. This induced confusion in me. Could I be living in the wrong decate? To double-check on the date I asked Stuart, Mark, Linda and Dave. They all said it was 1993 (except Linda, who hilariously thought it was 1994). Not content with their answers, I further checked with the office calendar. The calendar certainly backed up their claims. I still wasn't content. I phoned BT's speaking clock, which confirmed my earlier suspicions - i.e. it is indeed 1993. Not to mention 12.56 precisely. 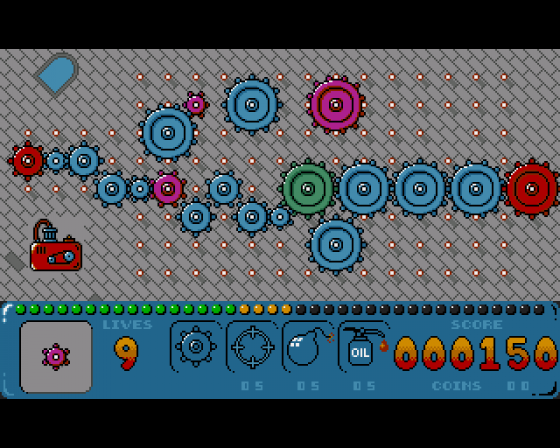 Gear Works, though, looks like, sounds like and plays like an old-fashioned C64 game. Even the name 'Gear Works' is lacking in lustre. It sounds like a fashion statement trapped in a bizarre 1960s and/or 1970s timewarp.

The basic idea is sound. The implementation is awful. In Tetris, simple as it is, there are seven different shapes which can be put together in an unlimited number of permutations. In Gear Works, there are three shape sizes which are further limited placement-wise by the positioning of the pegs. Once your brain adjusts to the peg patterning, you can work out well in advance what cogs should be positioned where. I couldn't be bothered to work out the possible mathematical combinations but Gear Works suffers from an acute inversely proportional index of possibilities. Which is all rather sad really. Gear Works has great potential. The planning and implementation lets it down badly.

With all that said and done, I've got to confess that I actually enjoyed playing Gear Works in a village idiot kind of a way. It's got the same kind of hook as a garden maze or a Sun crossword. It's not that you're going to get lost, be particularly challenged, or not manage to finish the thing. You'll do that okay. It's more a case of "How long is it going to take this time?" In fact, only if you're weapons-grade stupid or extremely young is Gear Works going to tax the grey matter lying between your ears.

Uppers: Lots of potential, fresh idea in an ideologically bereft market. Manages to keep you mildly addicted despite the overall lack of challenge. Would be good for young children if released on budget.

Downers: The limited number of gear sizes, severely impedes the challenge that the game may otherwise have offered. Shame.

Vastly overpriced for what's on offer. If released on budget around the £6.99 mark, it might have picked up another 10%, but it wasn't, so it doesn't.

This has lots of potential, and is a fresh idea in an ideologically bereft market. It manages to keep you mildly addicted despite the overall lack of challenge. 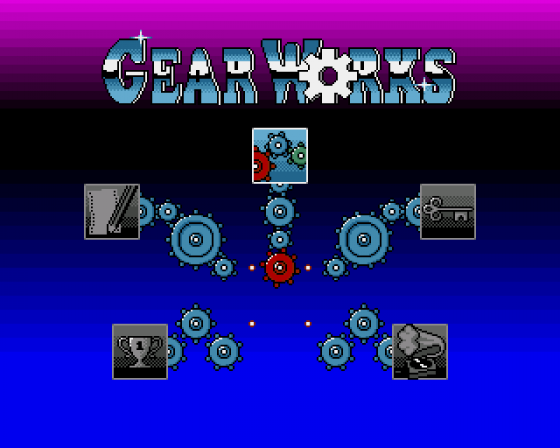 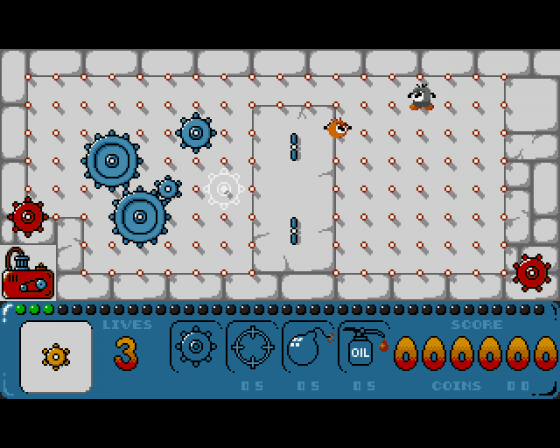 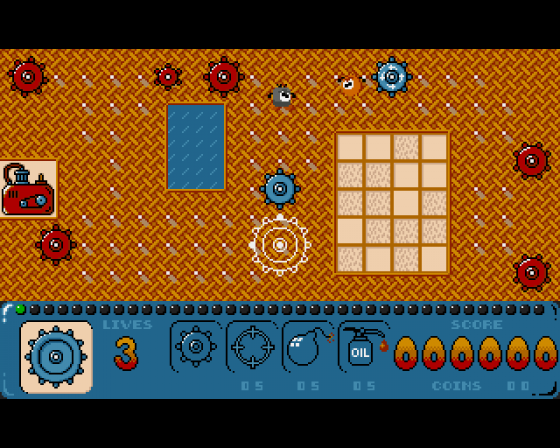 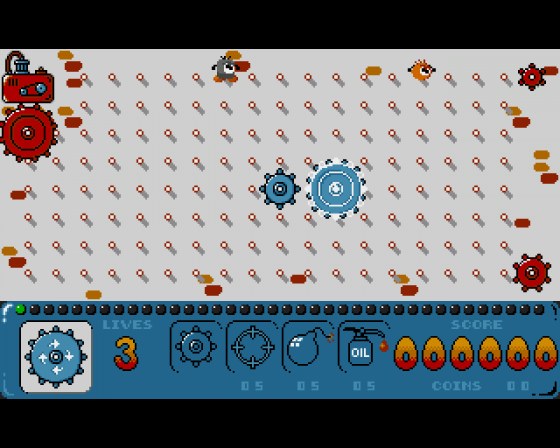 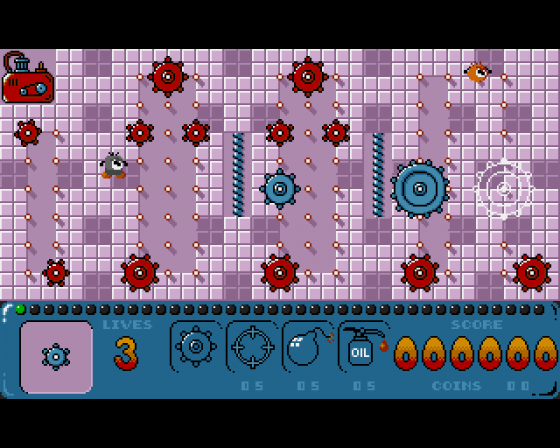 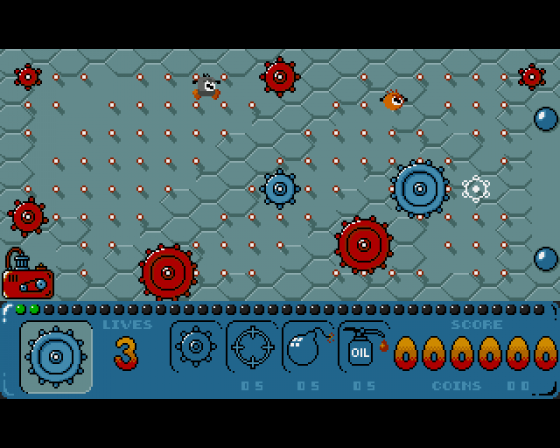