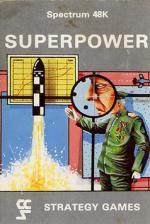 If you have ever fancied the life of a spy, then this program is likely to disappoint you. Not because it isn't a good program, but the gentlemanly approach and attitude has left and now the CIA and KGB have moved onto slightly more dastardly types of activity.

You play the intelligence executive of a major power and have the task of protecting and promoting the power's interests overseas. Your playground is part of the third world, an accurate scenario.

Play consists of all players having to make two types of move per round. The first, collecting information, either about a nation or a comparison of industry and structure. The second part is the chance to affect the balance of power and has you indulging in bribery/investment, funding the opposition and overthrowing governments: among the more peaceful normal activities.

The game is a good war game with maps to show achievement but little else in graphics. It is a long game of skill and strategy and as such will appeal to wargamers in particular.

A long game of skill and strategy and as such will appeal to wargamers in particular.