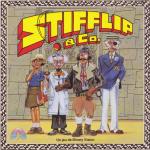 Count Chameleon is about to unleash a dastardly plot on the unsuspecting world. Through the mail-order ads in a civil service magazine, he has been selling rubber goods and his experiences with rubber have helped him to develop the Rubbertronic Ray. With this, he has the power to make everything starched and stiff become droopy and, worse still, it will affect the bounce of cricket balls. He must be stopped.

The program is divided into two parts which appear on opposite sides of the tape and part one must be finished before you start part two. Fortunately for the Empire, a group of heroes just happened to hear of his plans and set off for the Banamian republic to stop his heinous plan. The expedition is undertaken by four people who are Miss Palmyra Primbottom, Professor Bramdeath, Viscount Sebastian Stifflip and Colonel R G Bargie.

Each of the characters has their own strengths and weaknesses and their abilities will be needed to solve the various problems that you are set. Miss Primbottom is an expert embroiderer, Prof. Braindeath is the brains, Sebastian is the leader and the Colonel is a gardening specialist.

The screen is split into three main areas which are the location graphics, representations of the heroes, and the icons. The icons allow you to interact with other characters, fight, move, do things with objects, status and change character. Interaction with other characters allows you to talk to, give to or take something from another character. Fight lets you enter into fisticuffs with any enemy and you have a choice of punches to use on them. Move shows you a representation of the room with a pair of feet that can be pointed through the appropriate doorway.

An extensive list of options is available in things that can be done with the objects, for example: looking around, picking up, dropping or using an object. Status shows you the health of the appropriate character and your percentage score. Change character lets you switch between the four characters that you have under your control.

Location graphics shows you the room that the currently selected character is in and is split into two cartoon-like boxes. When you do something, such as move the character, the bottom picture scrolls beautifully upwards into the top box and a new picture appears. This effect looks really impressive and shows what can be done with good programming. The representations of the characters shows the three that you are not controlling and, if you change character, another impressive sequence of graphics occurs as the two cartoon boxes are peeled up into top right corner of the screen like the page being torn from a notepad. The pictures of the characters are then swapped with another good graphic trick.

Some of the graphic effects in this game are stunning, but it is a pity that colour is not used much. Tunes do feature in the game, but only occasionally. Sound effects are atmospheric and well programmed.

Being entirely joystick-driven, but having adventure overtones, makes it a difficult game to categorise. Arcade freaks probably won't like it, but adventurers and strategists will find a lot to keep them occupied if they find it in amongst their Christmas presents.

Interesting to see icons making a comeback in this one. They're well used to make a compulsive adventure. Palace's inimitable sense of humour also comes across well. The tasks are quite difficult and will test out any adventurer, but the presentation is beautiful so it will appeal to most people. It's not a game you can easily categorise, which is excellent news because it provides originality and enjoyment that you can't get from many titles these days.

It's as clear in green as it is in colour.

Grab Factor 77%
P. Well packaged and thought out.
N. Frustrating until you solve the first puzzle.

Staying Power 84%
P. Lots of problems to solve.
P. Effectively two games for the price of one.

Overall 81%
An unusual and interesting game.

A humorous, compulsive adventure... Spectacular screen effects and effectively two games for the price of one.