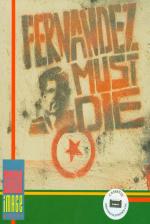 El Diablo (no prizes for translating that one) is a little South American state under the tyranny of the evil General Fernandez (boo!). Desperate situations justify desperate remedies, and, decidedly unchuffed with this situation, you take it upon yourself to liberate your country (hurray!) by killing the dirty despot. Fernandez, unlike some South American dictators whose names I could mention, is too sensible to ask the people whether they want him or not, so he Must Die.

This, one of the first fruits of the much vaunted new Mirrorsoft label, is a one or two player assignment. A score panel runs across the top of the screen and below it is your energy meter and the number of grenades and lives left. The rest of the screen is made up of a scrolling playing area viewed from above. You're the man in the shiny blue helmet heavily outnumbered by the ones in green.

A map of the exceptionally and commendably large playing area can be called up at any time, a flashing dot indicating your position. There are basically two stages to the game: outside in El Diablo's war-torn countryside and inside buildings. The outside world is a dangerous place, filled with hordes of Fernandez's men, tanks, aircraft and mines. A blast of machine gun fire deals with the troops, but grenades are needed to blow up the tanks. Succeed in destroy ing a tank though and some grenades are deposited on the ground for you to collect. Planes fly down the screen dropping bombs, red cross parcels and super troops. Red cross parcels restore your dwindling health and super troops are more dangerous.

There are plenty of buildings in El Diablo and blowing them up is as productive as it's fun. Inside you're likely to find gold or ammo. Bridges also cross the rivers and apparently you can't swim because one drop of water is fatal (so much for realism).

Scattered around El Diablo are jeeps which you can get into and blast at the enemy with. While you're inside the jeep it takes damage rather than you, until it falls to pieces beneath you [I've got a car rather like that - Ed].

When you're inside a building it's time to rescue the peasants who've been imprisoned by Fernandez. They can be freed by blowing their cells open. Enemy soldiers are also inside the buildings and they need to be dealt with in the usual manner. Grenades and gold can be found inside the buildings.

Your mission is to destroy the eight bases of Fernandez and get as much glory as possible. Points are awarded according to how many vehicles, buildings, troops and bases are destroyed. Freeing prisoners and collecting gold also adds to your score. A bonus life is obtained when you destroy a base.

If you like green games you'll love this, since just about every shade possible is used at one time or another. The vertical scrolling is smooth and fast enough. The sprites are flicker free and well animated. An excellent tune plays throughout the game and the sound effects are pretty smart too.

The playing area large and completing the game is going to take a long time. The only criticism is that action is a bit on the sedate side for really manic players, who could perhaps become bored eventually.

This is the first Image Works release on the CPC and it gets the label off to a cracking start: Bamboozal is coming soon, and let's hope it's as good!

Fernandez Must Die! The whole emphasis of the game lies in slaughtering hordes of the opposition and then topping the big guy himself. Compared to this, Rambo is Mary Poppins. But that apart, this is exceedingly enjoyable, looks terrific and sounds fabulous.

Overall 83%
A tremendous start to a new label.