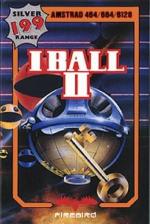 The Ball race are an intelligent and highly developed race. There is however one thing that annoys them, they know little of their past. Their evolution and ancestry are mysteries to them. They know where they can get the information though, from the old mines. Ancient artifacts lie there that could fill in the missing gaps in their knowledge.

Your ball can roll along the ground or jump up, but it's a real handful to control accurately. You have volunteered to search the mines for artifacts. The mines are not deserted though. There are things that try to kill you and there's also the danger of the radioactivity. The mines are blocked off and to get through to the next you need a key. The keys are positioned in hard-to-get-to places and so are the exits.

The hostile mine inhabitants can be destroyed by a bolt that you can spit forth. There are also smart bombs that kill everything on screen, but these have to be found first. Other objects can be found in the mines that do good or bad things to the ball. "Muddle" mixes all of the controls up so that you have to think very carefully before you make the next move. "Time warp" slows everything down so that the inhabitants are easier to avoid and "down to earth" deactivates bouncing objects

The levels are grouped together in fives, after which you receive an artifact. The order in which the levels are done is randomly selected. Extra lives are gained after you've collected four life stones.

The sprites are all single-coloured, but they are well animated. There's also some digitised speech that's just about understandable. Sound effects are poor.

Frustration is what this game is all about; control of the ball is really difficult. All of the levels are possible - honestly, but some of them are extremely tough.

This is an excellent challenge for control freaks, because getting the best out of the ball takes a lot of hard graft. This also means it's screamingly frustrating and it will take you ages to get anywhere with it. I enjoyed it, but don't have any fragile objects of furniture or cups of coffee nearby while playing it.

Just as easy to see everything in green.

Grab Factor 67%
P. It has a frustrating, addictive quality that makes you want just one more go.
N. Initial confusion and control difficulty may put you off.

Staying Power 67%
P. Plenty of levels to complete.
N. Some screens are just too difficult.

Overall 67%
P. At this budget price, it's well worth a look.

Digitised speech... plus a frustrating, addictive quality that makes you want just one more go... However, the initial confusion and control difficulty may put you off.