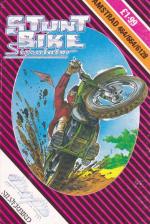 You, Chad Adams, arc the world's greatest stuntman, and to prove it you have set yourself five stunts to complete within a tight time limit. The screen shows a horizontally scrolling playing area with you and your motorbike viewed from the side. Above is the time remaining and your score.

Three attempts can be made at each stunt before the game ends.

In stunt one, you have to jump from a hang-glider and land on your bike. The road, however, is filled with cracks (didn't do your preparation, did you?) and other obstacles which make the timing of the drop even more difficult than it would already have been.

Stunt two is log jumping: you have to raise your front wheel over a log and then do the same with the rear. If you don't do both then the bike falls over and time is lost. Some logs can be driven around instead of jumped.

The third stunt is similar to the log jump except that instead of the bike jumping you leap out of the saddle and must land back on the bike after passing through flaming loops. Fourth is lorry catching in which you have to avoid obstacles (again) and get onto the back of a lorry. Fifth and finally there's helicopter hanging - more or less the reverse of the hang-glider stunt. All you do is leap off the bike and grab the helicopter. So that's alright then. No sweat. And you thought it was going to be difficult!

Yet another game in which there is absolutely no sound whatsoever. The horizontal scrolling is smooth, but slow.

Five variations on the up-down-left-right syndrome. They're not particularly difficult to complete either. And once you've done it, Game Over. So empty, it's practically a vacuum.

Grab Factor 34%
N. First stunt is one of the most difficult.

Five variations on the up-down-left-right syndrome. They're not particularly difficult to complete either.