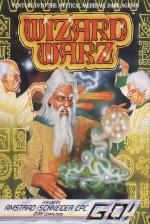 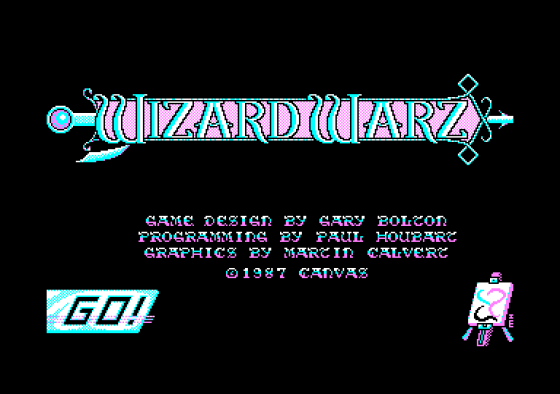 Despite what people think, life as a junior wizard is not all it's cracked up to be. It's not the most exciting job in the world, and the hours are pretty bad too. You decide that you've had enough of apprenticeship and want to go for real power and become the greatest wizard in the land. For that you'll have to take on the current Top Wizzes but before you're ready for that you'll need to get in some serious monster-bashing.

On the screen you get a circular view of the area immediately around you with a status panel for you and your opponent, while at the bottom of the screen is a picture of the objects you're carrying. Your status panel has a spell book, bar chart and picture of you - your opponent's is laid out identically. The bar chart has three bars that represent your physical (Phy), spiritual (Spi) and mental (Men) qualities if any of these reaches zero you die.

Spells are what you use to defeat opponents in this game and they come in the three categories of Phy, Spi and Men. Phy spells damage your opponent's Phy or protect yours and the game applies to Men and Spi spells. There are 26 spells to choose from, and their cost in points varies from spell to spell. More expensive spells are more powerful.

The game is split into three levels that load separately one after the other. In the first level you have to find six treasures each stolen from a different town by a monster. The only way you can retrieve the treasure is by killing the monster that stole it. The first time you enter a town you'll be given some food (which restores your Phy to maximum), and when you return with the correct treasure the grateful inhabitants give two more meals. When the sixth treasure has been recovered it's time to find the seventh town and set off for the second part of the game.

Part two is completed when you find a ring, wand and dagger. Each of these is guarded by a monster that must be fought. There are lots of monsters to choose from and they can be fought in any order. Unfortunately, you have no idea which monster has which object, and since there are 32 monsters and only three objects you'll be very lucky to find them all first time. The monsters that don't have objects have spells instead that you can store in your spell book. If you don't want the spell then you'll get your energy recharged. You may also be offered a familiar that gives you immunity to a particular spell.

At last you get to take on the seven sorcerers and go for the title of Greatest Living Wiz. All you need do to achieve this long-felt want (wand?) is to defeat each of them in single combat. A wide range of spells should now be at your disposal to eradicate the opposing wizard. Beware, though, because every wizard has a familiar which protects just as well as yours will.

The graphics of the circular playing area are small and often confusing, but the scrolling is smooth and fast. The pictures of you and your opponents are colourful and rather well done. There are, however, no tunes and no sound effects: you inhabit a silent world, it seems.

The advertising implies that you're in for a role-playing game. Instead you get a simple arcade game that has had some spells thrown in to add interest. The result is a confusing arcade game that takes a considerable amount of time to complete.

Wizard Warz on the CPC was a grave error. The game design is fairly detailed, but the emphasis is too much on destruction. Let's face it, if this is typical wizard behaviour, the playing area would be a desert in months.

Grab Factor 64%
P. Fun learning the weaknesses of your enemies.
N. Stage two is a bit too difficult at first.

Staying Power 55%
P. Three levels to the game and the seven wizards take some beating.
N. Chop up one monster and you've diced 'em all.

Overall 57%
Is this what the computer industry *really* thinks role-playing is all
about? They couldn't be more wrong.

A grave error, this. A confusing arcade game that takes a considerable amount of time to complete. 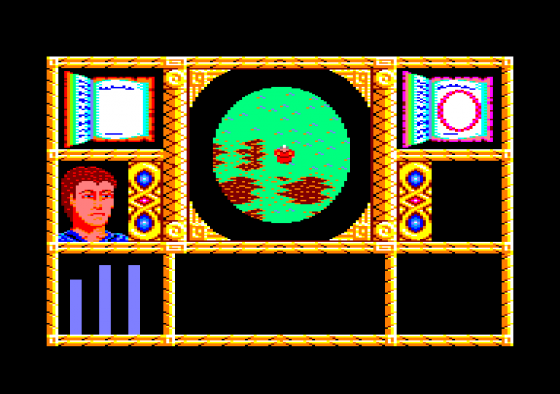