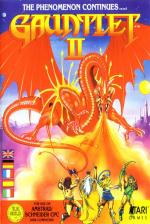 One year on, Thox, Merlin, Thyra and Questor return in another conversion from the arcades. All of the features of Gauntlet are there and some new ones have been added to improve on the old game. Two people can still play as a team in their exploration of the dungeons and there are over a hundred for you to explore.

The game is basically the same with a lot of additions to give more variety to the gameplay. The first difference is that both players can use the same type of hero; two wizards, for example. This may not seem particularly useful, but it will stop the arguments over who uses which character. You can also choose what colour the character is. Special powers have been retained from the original and are used by collecting the appropriate potion bottle. Extra armour, magic power, shot power, fight power and pick-up power potions can be found. Amulets have been added and they do one of the following invisibility, invulnerability, repulsiveness, transportability, super shots and reflective shots.

Each of the levels has an exit and your objective is to reach this exit and stay alive for as long as possible. Unfortunately, there are lots of hostile dungeon denizens who attempt to hamper your progress through the game. All of the old monsters, sorcerers, grunts, ghosts, lobbers and demons, are present and they still pour out of generators. Death still wanders around the dungeons and severely drains your energy. Some new monsters are the super sorcerers, acid puddles and the "it" and "that" monsters. All four of the new monsters can't be destroyed by magic, but are stunned instead.

Super sorcerers teleport in, shoot you and then teleport off again. This continues until you shoot him. Acid puddles slither around aimlessly and drain your health by a large chunk if you bump into them. The "it" monster causes all of the monsters to be drawn towards the player who is "it". If you bump into the other player then you can make him become "it" instead. The "that" monster looks exactly like the "it" monster, but makes you lose one of three things - a special power, a potion or 100 health.

Food and bottles of cider can be found littered throughout the dungeons and eating or drinking them increases your health when you pick them up (cider never makes me feel healthier). Beware the poisoned food as this decreases your health. Shooting poisoned food causes all of the monsters to slow down for a while. Treasure chests now come in two forms which are the ordinary ones and the locked ones Treasure chests give you bonus points and locked chests need a key for them to be opened and contain treasure, a key, food, a potion or Death.

Treasure rooms appear as in the original and they give you the opportunity to boost your score and possibly acquire some potions. To get the bonus in the treasure room you need to find the exit within the time limit. On later levels, your shots can often stun or wound the other player and so you have to be more careful with who you shoot at.

The graphics are very similar to those found in Gauntlet and the background graphics are more detailed. Animation is simple but effective, and movement of the characters seems smoother. The "it" monster looks particularly good. The four way scrolling is smooth and fast. Sound is limited to spot effects with a title tune on the loading screen.

The first game was one of my favourites and I think they've managed another winner. The additional features add significantly to the gameplay, and the improvements to the graphics are also very effective. It's bound to appeal to everyone who bought the original and should entice yet more people into its addictive grasp.

You can do the monster mash as easily in green as you can in colour.

Grab Factor 91%
P. Has all of the addictiveness of the original.
P. Extra features make it even better.

Overall 90%
Whether you're a fan of Gauntlet or not this will keep you occupied through the winter months.

Whether you're a fan of the original Gauntlet or not this will keep you occupied through the winter months.