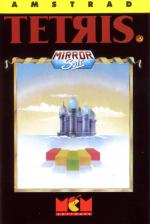 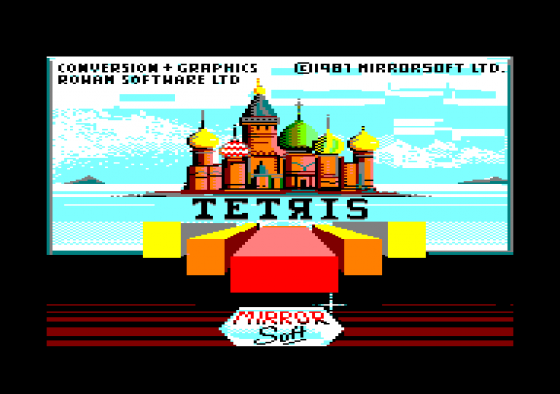 Watch out, the Russians are coming. A Soviet invasion is about to be unleashed upon the unsuspecting British public. Before you go out and barricade the streets and prepare to repel invaders, fear not. It's only a computer game. The game was programmed by Vagim Gerasimov, a student at Moscow University and has been brought to Britain via Hungary. It's the first time that a game originating in the Soviet Union has reached our shores.

Tetronimoes are shapes made up of four squares linked along their edges. They include: straight pieces, squares, "L" shapes, "T" shapes and many others. The principle of the game is very simple, a random tetronimo appears the top and falls towards the bottom. While it's falling, you can rotate the shape through 360 degrees in 90 degree steps and move it left or right. 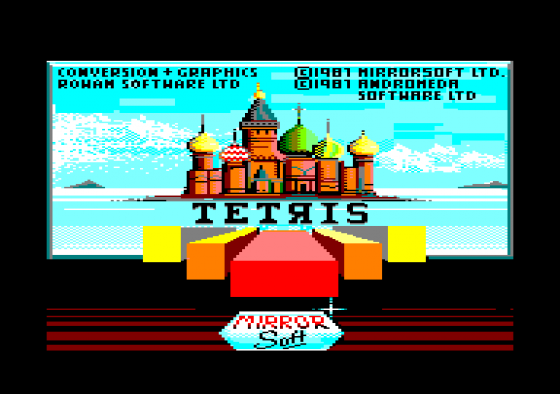 Points are scored for every piece that you manage to fit on the screen before it's filled. Strategy features heavily in the game because you need to keep forming horizontal rows of colour across the scren. If you complete a row, it disappears and the blocks above move down a row. The clearer you keep the screen, the longer that you will be able to keep scoring.

On the screen, there is the playing area in which your tetronimoes fall and on either side of that is the status area. In the status area is your score, level, number of filled rows, a summary of the key commands, a record of how many of each piece has falled and a window in which the next piece can be shown. The level setting determines how fast the shapes fall.

After every ten rows are filled the level increases by one until it reaches the maximum of nine.

To make play a little easier, you can switch on the next shape window and the shape that will follow the one currently descending the screen is displayed. This information is very useful, especially on higher levels, because you have very little time to make a decision on where the shape is to positioned. If you leave spaces between the blocks then the screen will fill up more rapidly and the end of the game will draw near. If there are spaces on-screen and you complete a row above it, then you may eventually get into a situation where that empty space can be filled again.

Graphics are very simple since all they are is squares linked together that fall down the screen. The shapes are colourful, but the rest of the screen has a boring design to it. There are no sound effects, but a good, if a little irritating, tune plays throughout the game. The Russian original of the game was programmed on an IBM PC and the conversion doesn't look brilliants. The presentation of the game is very amateurish to look at and it appears to be a bit of a rush job.

As far as gameplay goes, it does have a certain appeal. Careful thought is needed as to where a shape should be put, because the wrong decision can quickly end your game.

After a few games, you begin to pick up the principles and your scores grow rapidly. The only problem that I think could arise is reaching a maximum score. On level nine, the pieces fall so quickly that you often can't move the piece into the desired location and the game becomes impossible.

It's a good game for a while, but you probably won't play it much once you've reached your peak.

Graphics 48% P. Good use of colour. B. Overall presentation of the game is dull.

Staying Power 66% P. The level of difficulty increaes at the right speed to keep it challenging... N. But it becomes impossible to get further!

Overall 72% An excellent concept that just has a few rough edges.

Here I have to confess that I've played the game on another machine and preferred it there. I don't normally compare machine versions, but in this case the other version had a feature which is noticeable by its absence on the CPCs - a pause mode. This may sound trivial but when the blocks are appearing at full speed, there is no way of keeping up with them, or even moving them in time.

A joystick-operated pause mode allows you thinking time, although the shape manoeuvering would still have to be done in real time. This omission destroys much of the game's long-term strategic appeal and turns it into a simple game of reflexses rather than thought. With a pause mode, you can plan your moves ahead, enhancing the brain-testing element. I still enjoy the same but its lifespan and addictiveness have been badly hit by one small omission.

The pieces sometimes merge with the background on the green screen and make play difficult!

After a few games, you begin to pick up the principles and your scores grow rapidly. 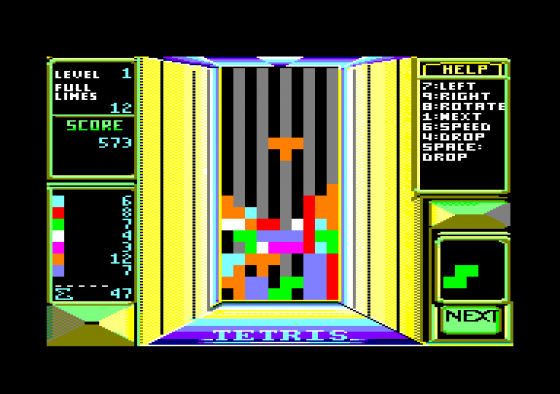