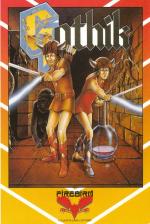 The wizard Argoth is dead, killed by Ansalon the evil archmage. Ansalon was not satisfied with killing Argoth; he also chopped his body up into little pieces and distributed them throughout the seven levels of the catacombs so that he couldn't be resurrected. You have a choice of rebuilding Argoth in the guise of either Olga or Olaf the vikings.

Gameplay is very similar to Gauntlet, you have a four way scrolling maze with monsters to kill, potions to find and of course bits of Argoth. The main difference is the status display which can be called up at any time.

This shows you how much of Argoth you've found, your magical energy level, your life force, any relics that you've found, your position in the tower and which of the three weapons you've selected. Magical energy is used up through casting spells and your life force is drained when the inhabitants of the catacombs hit you, in melee or missile combat. The skeleton or Argoth is filled in as you find more and more bits of him... The three weapons that you can choose are arrows, lightning bolts or the devastating fireballs.

There are 32 different potions that can be found throughout the catacombs; most are useful, but there are some nasty ones. Jerico is a great potion because it makes all the walls on a level fall down, trap on the other hand makes bracken appear all around you which pens you in. Fortunately it can be burnt away with the cantrip (small spell) Firestorm.

The scrolling is adequate and colour is okay, but the animation is poor. A boppy little tune plays on the title screen, but there are none within the game itself. The sound effects are not fantastic, but they do their job.

It's not the most original game to come out this year but it is fun to play. It's a pity that the good potions can't be distinguished from the bad in any way, but perhaps it would make things too easy if they could!

You can definitely get too much of a good thing, and I for one have seen too many Gauntlet clones. This one does have some nice touches in terms of the potions and adversaries, but the gameplay is still very familiar.

Become a Supreme Pune - whatever that is!

Sonics 51%
P. Do a viking dance to the title tune!

Overall 59%
P. Good enough fun to play, but there are already many games in similar vein on the market.

Good enough fun to play, but there are already many games in a similar vein on the market.