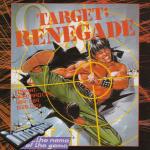 Revenge is the motive in this sequel to Renegade. Your brother Matt was hot on the trail of the evil Mr Big and managed to learn plenty. In the process, however, he was captured and executed. Now you want to get even - an eye for an eye, a tooth for a tooth, vengeance is mine and so on. In other words, as in all those Death Wish films, a spoonful of gore helps the gratuitous violence go down.

There's one major difference between this game and its predecessor, however; namely simultaneous two player action (You can of course still play solo). Otherwise things look pretty similar, with a large flick-screen playing area and a panel at the bottom of the screen for each player indicating health, score, time and number of lives remaining. You begin with three lives, but in the first few games you lose them very quickly. Bonus lives are awarded at 50,000 points and every 100,000 thereafter. When time runs out you lose a life and the clock is reset -if you have any lives left, that is.

There are five scenes in all, each occupying several screens. The gangs of thugs vary from scene to scene and, as you'd expect, become increasingly unreasonable and difficult to deal with. The first scene is a multi-storey car park where the motorcycle gang hangs out. You begin on the upper level and must reach street level within the time limit. There are two sorts of opponent: bikers and pedestrians. The former must be unsaddled before you can beat them to a pulp; the latter you can pulverise right from the outset. Some gang members are armed with a sledgehammer, but if you manage to knock it out of their hands you can use it to crush their skulls. Unfortunately you lose the hammer at the end of the level.

Scene two is the 'Seedy Street at Night' where you encounter the 'ladies of the night'. They too, like everyone else, are after your blood and they too, like everyone else, have to be beaten to death: do unto others before they do it unto you. Some carry chains which, like the hammer, can be used to bludgeon the girls. They have a gun-toting boss: if he hits you you lose a life immediately. His supply of ammunition, fortunately, is limited and, after he runs out, it's down to hand-to-hand combat again. The boss also has a habit of hitting his girls and killing them. Not a nice chap to work for.

The park is the next stage where you come across a bunch of skinheads, again after your blood. (Don't you have any friends?) Some of the gang headbutt you and others use a club to brain you. Scene four is the shopping mall where the Beastie Boys and their dogs loiter with intent to kill (how did you guess?). When you finally battle your way to the end of the level you get to visit the bar, occupied by Mr Big's bodyguards. Get past them and it's time to wreak revenge on the big guy himself.

In Renegade you played two handed, one for movement and the other to attack. This was inevitably a little awkward until you had had some practice and mastered the technique. In this sequel, however, the controls have been simplified so that you only have one attack key. All the old tricks have been left in, such as being able to beat someone's brains out while they're lying on the floor, though this time round you don't actually get to see blood (red or blue) spurting from heads.

The graphics are just as good as in Renegade, with good clear colour and well animated figures. Sound effects are average, and the continuous tune that plays can be turned off if it gets too irritating [It does - Ed].

Apart from the simultaneous two player option, Target Renegade offers nothing new. That one feature does make a difference, though, because now you can get a friend to join in and have a good time kicking and maiming together (bearing in mind, of course, that it's only a game!). On the other hand, the two player option is not the walkover you might expect, because more opponents are thrown at you to make life and death more interesting. Another disadvantage to the two player game is that you can hurt each other if you're not careful.

The ability to pick up the weapons and use them against the gangs gives the game a little more excitement. Completing the levels within the time limit isn't easy, and very often there'll only be a few seconds left on the clock.

After you've seen all the gangs you may lose interest, but until then you'll have plenty of fun with all this gratuitous violence.

It's strange to see just how compelling the two player option can be. Working as a team is much more rewarding than solo play. I'd like to see many more games with that attraction.

On the minus side, Target Renegade is simply a spiced up punch-'n-kick game. It is to be hoped that programmers will include new features and add more.

Grab Factor 93%
P. A very good combat game for one player...
P. And even more fun for two.

Staying Power 81%
P. Five large playing areas to fight through.
N. Not quite so enjoyable once you've seen all the gangs.

An excellent sequel... Colourful and detailed graphics... It's strange just how compelling the two player option can be.