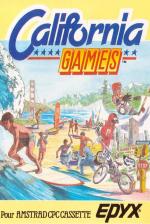 California has a reputation of being full of beach bums, starlets and all the world's wacky people, getting sun tans and generally enjoying themselves. This sounds like a nice way to live; it beats working for a living.

The six events that you can take part in are skateboarding, footbag, surfing, roller skating, BMX bike racing and flying disc throwing. You can practise an event, do one event, do all six or select which events you want to do. One to four people can play.

Skateboarding is the first event and you have a side view of a half pipe with you in the centre on a skateboard. You score points by doing various acrobatics while moving up the slopes of the pipe.

The footbag is a small bag which you have to juggle with your feet. The more elaborate the move, the better the score that you get. You have 75 seconds to score as high as possible.

Surfing is the next sport and here you have to manoeuvre inside a wave to make as long a run as possible. The further you get, the higher the score.

Roller skating over an obstacle course is no mean feat. It'll take some practice before you can do the course with no problems. You begin the next event sitting in the saddle of a BMX bike at the start of a course filled with obstacles. You have to cover the course in the fastest possible time and do as many stunts as possible for points.

Finally, there's the flying disc, or frisbee, throwing contest. You are standing at one end of a field with the disc in your hand. You select the angle and strength with which the disc is thrown and then control the catcher at the other end of the field who has to catch the incoming disc to score.

There's no music in the game and the sound effects are average. The graphics are colourful, but do have a chunky appearance.

Six events that are fun to some extent, but they may lose their appeal after a short while. Initially they're too difficult, but practice takes you to the other extreme of far too easy.

Grab Factor 63% P. Up to four people can play N. None of the events grabs your attention

Graphics are colourful, but "chunky"... The six events are fun... Initially they're too difficult, but practice takes you to the other extreme of far too easy.