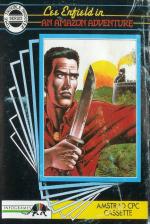 This is the third of the Time Troubleshooter games in which Lee Enfield is the hero. His old arch-enemy the Yellow Shadow is up to no good again: he's after the Chibchas treasure and poor old Bill, Lee's friend, has been kidnapped by the Shadow. A jungle at the foot of the Andes is the setting this time.

The screen display is very similar to that of Tournament Of Death, with a small flick screen playing area and a large picture of Lee's face. The expression on Lee's face changes as he gets wounded. The gameplay is similar to Tournament of Death.

You have three things to help you in your quest to defeat the Shadow and rescue Bill: a knife, some dynamite and a thermal magneto detector. The detector is a radar type device that shows any creatures or people in range.

The jungle is filled with dangers: large creatures scurry around in the undergrowth and servants of the shadow stalk you. It's a matter of kill or be killed. Can you defeat the Shadow?

Sound effects are appalling, but there's a pleasant title tune. The graphics are not quite as bad as in Tournament Of Death, but they are still jerkily animated.

Charging around the jungle fighting and blowing things up is boring and there's little else to do.

Uninspiring, to say the least. About the most exciting thing is getting blown up by your own TNT! Otherwise the wandering around is tedium itself. If this is a series of games that's going to continue, it really must improve in quality.

Grab Factor 42%
N. Endless charging around the jungle.
N. And more of the same.

Staying Power 34%
P. Large playing area to explore.
N. Not enough variation in things to do

Overall 37%
A lot more work needs to be done if Lee Enfield is to improve.

About the most exciting thing is getting blown up by your own TNT! Otherwise the wandering around is tedium itself. If this is a series of games that's going to continue, it really must improve in quality.