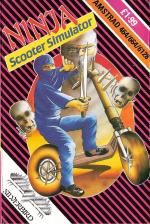 Ever played Trailblazer? If so, you'll soon spot similarities. The idea is similar: you charge across terrain avoiding and jumping over things trying to reach the end of the level in the time limit. The difference is that in Trailblazer the terrain came out towards you, while here it scrolls right to left.

Each level, four rows deep and many screens long, has a bar across the bottom of the screen to indicate the length of the level. A clock at the top counts down the time you have left to reach the end of the level and alongside it is your score. You have one life and that's lost when time runs out. Bonus points are awarded at the end of the level for any time remaining.

The levels are composed of seven different objects: empty squares, holes, walls, ramps, watches, bumps and speed-ups. Falling in holes or hitting walls knocks you off the scooter and loses you valuable time; bumps slow you down; ramps launch you into the air; speed-ups make you go very much faster but the effect only lasts to the end of a level or until you crash into something. Collecting a watch adds to the amount of time remaining to complete the level.

There are also skulls, cars, skateboarders and clubbers, all of which knock you over when you touch them.

A fast and furious tune plays through-out, but there are no sound effects. The scrolling of the graphics is very jerky, but speed is what counts and there is plenty of that. The sprites are rather better on colour than animation.

Ninja has little going for it in originality or technical excellence, but it makes up for it in playability. The one major criticism that I have is difficulty. It's too easy to complete levels and you may get bored with it too quickly. Having said that, however, I'm aware that level of difficulty is notoriously difficult to get right, and what one player may find a cinch another may struggle for weeks to complete.

If you're not terribly good at games (like me) you could find yourself attracted to this. I mean, how many games can you get to level 36 on your first attempt? It's put together quite well, with the jumps and speed ups adding variety.

Graphics 46%
P. Colourful sprites and backgrounds...
N. But the horizontal scrolling is terrible.

Sonics 58%
P. Excellent continuous tune, but it could drive you crackers.

Grab Factor 65%
P. It has that elusive addictive quality that makes you want to keep playing.
P. Very easy to play, even for novice gamers.

Staying Power 46%
P. Loads of levels to complete.
N. You'll probably get bored before you lose.

Overall 63%
Not mindblowingly original, but at £2 you can hardly go wrong.

Not mindblowingly original, but it has that elusive addictive quality that makes you want to keep playing.