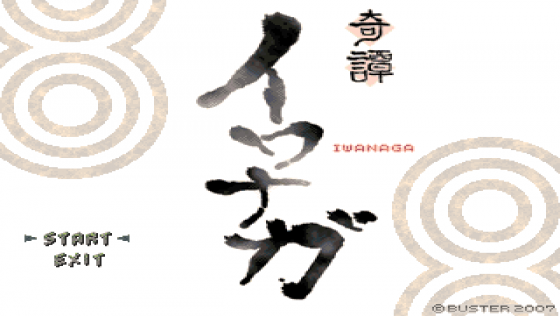 The world of freeware action games is wrought with clones, remakes, and fan-sequels. It's a rare treat when homage takes a subtler approach and tried to capture the ethic of the games its creator worships, rather than copy their mechanics.

Iwanaga is one of those rare gems. One-man development team Buster makes no bones about his love for Treasure. But where even commercial pastiches like Gunner's Heaven and Panzer Bandit have at best been able to approximate Treasure's greatest hits, Iwanaga manages to capture that spark of originality that is so key to Trasure's success.

Pushing the Shooter Maker engine in directions I never even knew it could go, Iwanaga is a unique take on the side-scrolling run-and-gun genre. It might at first remind you of Cabal or Nam 1975, with cursor-based aiming and a character that runs from side to side, but the gameplay system packs a lot more depth than you might expect. 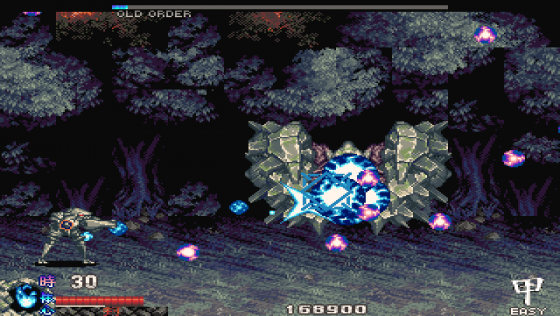 As in Alien Soldier, you'll be able to dash across the screen and pass through enemies and fire unharmed. You have a sword that can nullify certain bullets, just like in Radiant Silvergun. And much like Silhouette Mirage, you have two types of fire that can be switched between.

The dual weapon system is the most complex of Iwanaga's gameplay hooks. Each weapon not only behaves differently, but drains as it fires. When it drains, it also charges the opposite gun. Killing enemies with one firing type will yield the time bonuses you'll need to reach the end, and the other will net precious health bonuses to keep you alive. You'll need to use both weapons and balance them properly in order to survive.

It's surprisingly deep, made more interesting by some very strong level design. Actually, level design might be the wrong word, since, like many of the games it pays tribute to, Iwanaga is almost all bosses. You'll get to fight popcorn drones here and there to fill you meters up, but you're never more than a few seconds, from some giant menace.

And these guys are classic multi-segmented, screen-filling baddies straight out of the finest 16-bit classics. Buster's pixel art really shines here, and all the designs look fantastic and bleed individual style. The harder difficulties make things even more fun with more fights, and more complex patterns. All told, it's a short game, but on the hardest difficulty, it could pass for a full-length arcade game.

It's great to see Buster really coming into his own. It's a shame he's still bound by the limitations of game creations software, as I can only imagine what he could pull of in a game coded from the ground up. All told, he's done a truly impressive job of overcoming these limitations, with a sophisticated piece of old-school that captures what really made these games so special in the first place.

Buster's pixel art really shines... It's a short game, but on the hardest difficulty, it could pass for a full-length arcade game... A sophisticated piece of old-school code. 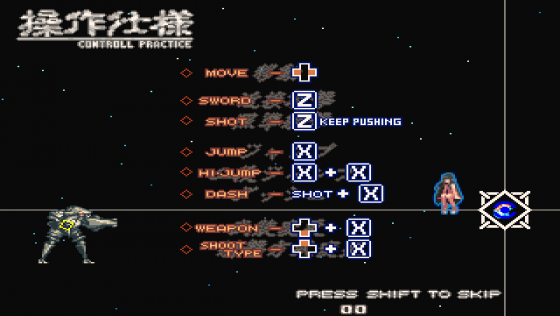 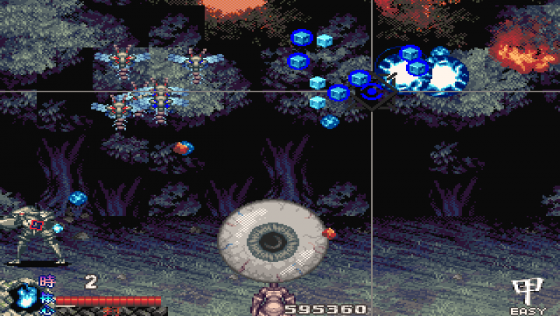