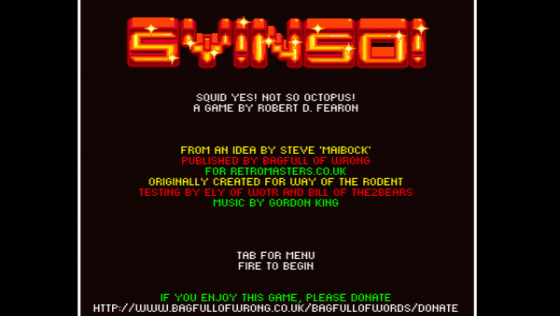 War has never been so much fun. Or at least not since the last time.

It's late in the evening New Year's Day. Completely knackered from playing a seven hour DJ set, my ears still ringing and head pounding, I switch on my PC to check my email - and Hallelujah! Rejoice! Oh happy day! Amongst the spam and penis-patch ad's (satisfaction guaranteed!) I spot an email announcing the release of War Twat 2, the completely unexpected sequel to one of RGCD's all-time favourite arcade blasters. Excitedly I follow the links to Rob Fearon's new website, grinning inanely at the chaotic screenshots as the game downloads. I grab my gamepad, double-click on the program icon, turn all the effects and settings up to maximum and press the fire button. Then my brain happily bubbles and melts in an orgasmic overload as my eyes attempt and fail to process the on-screen chaos. 10 seconds later it's game over. I didn't even see what killed me.

War Twat is back, and this time it's even more mental.

Squid Yes! Not So Octopus! (to give it its full title) is basically everything I would have asked for in a sequel; it's more refined, fully-customisable and expanded in all the right places. It even comes with an unnecessary background story too (in predictably Jeff Minterish fashion) - something about a radioactive squid on a quest for vengeance after a bunch of pesky alien robots attack his planet, ruining his birthday. And I believe it's even possible to finish the game (although I'm currently nowhere near to getting there); to win, all you have to do is survive the onslaught for eight minutes. Eight minutes in a game that normally kills you within eighty seconds... 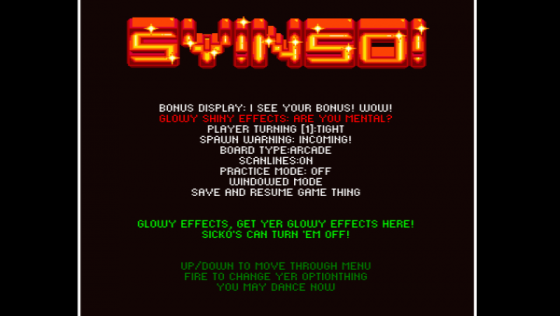 ...But fear not. Being the kind gentleman he is, OddBob (aka Robert Fearon) has generously provided an option screen that allows you to configure exactly how mad you want the thing to play. There's the ability to tone down (or turn off) the visual effects, play the game in either 16-Bit pixel art or vintage arcade style, display a visual warning announcing the arrival of new enemies to the arena and even customise the turning circle on the player-character. And all of these options make a dramatic difference to how the game plays.

With all the options toned down, SY!NSO! looks and plays very much like the 16-Bit classic Llamatron, the only real differences being the lack of llamas to rescue and the unconventional turning arc that the player has when moving their squid around the arena. This is a good thing in my opinion, as I have a special place in my heart for Llamatron and still to this day regularly play the original on my (t)rusty old Atari STE. Turn up the settings a notch, and the game becomes a little more like the original War Twat, still very playable, but with considerably more going on. Turn them all up to max and the game becomes completely impossible for all the same reasons as the original, yet it's still highly entertaining for the laugh-out-loud factor. I seriously doubt that anyone can actually play the game effectively with all those distortion effects and supernova-sized explosions going on, but feel free to try and prove me wrong!

Everything I loved about the original is still there, especially the oh-so-important LSD-fuelled surrealism, with perfectly pixelled robots, mushrooms, house-hold brooms and radioactive zen rabbits amongst the cast of many bizarre enemies that replace the original's buses, handbags and bulldozers. It's still fiendishly hard, yet this time at least you know it's winnable (especially so when played with the eye-candy turned down). The music and sound effects sound as though they've been lifted straight from the golden age of computer-gaming, and the game-play is spot on perfect - different enough from the original to make it worth playing in its own right, yet sufficiently familiar to warrant the title of sequel.

Rob has created a game to be really proud of here. It would have been nice if there was a competitive 2-player hot-seat mode (or even co-op) this time round, but as it stands, SY!NSO! is a superb sequel to an already fantastic game. Now if only he'd get back to work on G-Force!

Squid Yes! Not So Octopus! is pretty much the sequel to Oddbob's arena shooter War Twat (also reviewed by my "good" self elsewhere in this issue of RGCD) and as such I really should like it; the same ideals of hammering the player until they start sobbing like a girl are still there (which already sounds like a fun evening in to me), the eye-watering visual effects are present (although they're turned off as default) and the whole deal about not having any lives in reserve or power-ups for the weaponry is all as per the original. But some things have changed between War Twat and SY!NSO! and the real deal breaker for me personally is the control system because I really can't get on with it.

The player movement is inertial and the firing based on the current direction of motion; this means that there isn't a way to cover your backside easily when moving and there's no such thing as an arena shooter that doesn't encourage running around the play area or indeed away from your assailants. Bringing the guns to bear on a pursuing nasty usually involves heading straight for them as with the original game but, because it takes a fraction of a second longer for the direction change to register, the player ends up moving very close to the fray whilst the guns are playing catch up and still firing elsewhere! To compound that issue, the nasty release system has changed and, rather than the visible U.F.O. spawning points, objects materialise within the play area either in a fixed formation or placed randomly and there aren't any checks to prevent something appearing directly under the player. Whilst it's possible to move out of something's way as it's fading in, that inertial control again means that there is very little in the way of reaction time, rendering these situations fatal on the majority of occasions.

I honestly wanted to like SY!NSO! - actually, after playing quite a bit of War Twat previously I expected to love and adore the thing, take it out for dinner, whisper sweet nothings into its ear and... well, perhaps we won't go there but you get the gist. Sadly, even after some prolonged sessions it just doesn't seem enjoyable to me; War Twat is deliberately, arse-clenchingly difficult and rather perversely loveable for its homicidal tendencies but SY!NSO! is as just vicious and doesn't want to give players the means required to actually fight back. At the end of the day I want to be battling against the slathering alien masses, not the control system.

At the end of the day, I want to be battling against the slathering alien masses, not the control system. 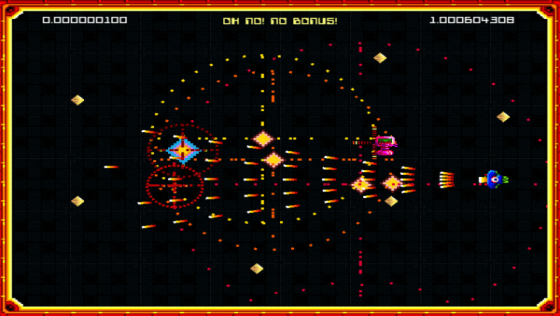 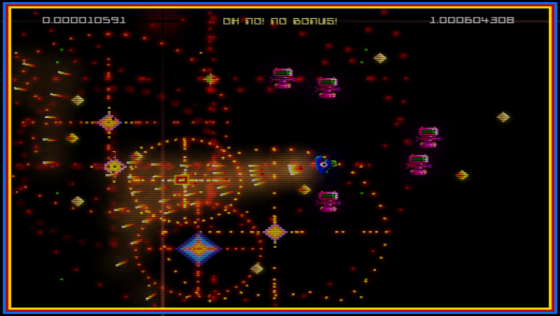 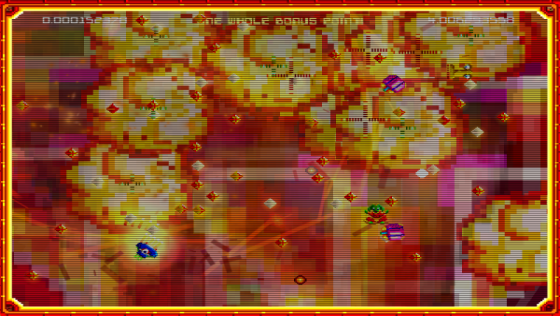