Ahh, the humble Harrier jump-jet. Catapulted into the public's consciousness in the early eighties due to its aptitude for shooting down unfortunate Argentineans during the Falklands conflict, it went on to star in a number of home computer games during the decade of Thatcherism and Spandau Ballet. Durrell's Harrier Attack, a lovingly accurate depiction (by Speccy standards) of a bombing run on downtown Goose Green, was enjoyable enough take on Konami's Scramble. However the Commodore 64 had Steve Lee's Falcon Patrol, whose influences were significantly more divine, namely Eugene Jarvis's Defender.

Falcon Patrol is certainly one of the best of an early batch of UK-produced C64 titles. The game's basic premise, a desperate fight to defend a small desert town against the increasingly numerous attacks from squadrons of enemy Mirage fighters, scored few marks for originality but was an enjoyable one. The star of the show was definitely your nimble Harrier, with its famous VTOL abilities lovingly recreated on the humble 64 in their entirety. Your jump-jet was simple to control but highly maneuverable, with a great control 'feel' and some relatively true-to-life in-game physics which struck a perfect balance between realism and playability.

Staniol's remake captures the essence of Steve Lee's original very nicely indeed, while subtly blending in a number of excellent updated elements. The first things you'll notice as you lift off from your landing-pad and reach cruise altitude above the sand dunes are the rather nifty new multi-layered parallax scrolling and cloud effects. There's not much time for admiring the scenery though as blips on your early-warning radar-scanner will soon converge on your position and, heralded by the blistering screech of jet exhaust, enemy planes will thunder into view with guns and bombs blazing. You have two strategies to deal with these aerial interlopers, either waiting for them to whizz past and giving chase to deliver a hail of missiles up their tail-pipes (the sensible option) or attempting to tackle them head-on (the fool-hardy option, which does however award you extra points for your lunacy). Most players will opt for the former strategy, and chasing down a pack of uncannily hard-to-tag Mirage fighters is a lot of fun. Another great feature of the remake is the use of particle effects, and missile and exhaust trails, leading to some spectacular and often amusing Red Arrows-style moments and narrow misses with enemy planes, intentional or otherwise. Get enough missiles into an enemy jet's behind and it'll tumble flaming from the sky to explode in a fireball of debris on the desert below. These flashy updated special-effects add to the enjoyment of the remake considerably.

To up the ante for the remake, Staniol has added a few welcome new features to spice things up a bit. Friendly factories, radar stations and oil wells are now dotted over the landscape, as well as the multiple re-arming/re-fuelling take-off pads seen in the original, and all must be protected for your welfare in the game. The enemy planes will try to take these strategic sites out with a well-placed bomb, and losing too many will affect your rate of re-fuelling or re-arming (oil wells and factories respectively) or the functioning of your radar-scanner (radar stations, natch). Most important however are your landing pads, lose them all and you won't be able to re-fuel and you'll soon be buried nose-first under the Sahara. Luckily these facilities re-spawn at the beginning of each new level.

The desert landscape you find yourself patrolling has been expanded and feels about twice the size of the original game's (before wrapping round Defender-style). This gives you a bit more space to play with, the downside being that it can take a while to catch up with enemy planes, which are only moderately slower than your Harrier and might cause some frustration for those that simply want to wade quickly into the action and shoot things. However on later levels, when the game's AI starts to become a little more savvy and the number of bogies in your area increases you'll be very grateful for the extra airspace.

For the time being the game doesn't support gamepads or joysticks, being keyboard-control only and using the cursor keys for movement and the space bar to fire. Staniol is however considering the possibility of joystick support at some point. Overall though this is a sterling first-time effort from a coder who recognises and understands the mechanics of the first Falcon Patrol, and has set about actually trying to improve them while retaining the key elements that made the original such a good game. Patrol Falcon delivers the thrills, spills and excitement of jet combat in 2D airspace more successfully than any other game your correspondent has played in a long time.

Delivers the thrills, spills and excitement of jet combat in 2D airspace more successfully than any other game I've played in a long time. 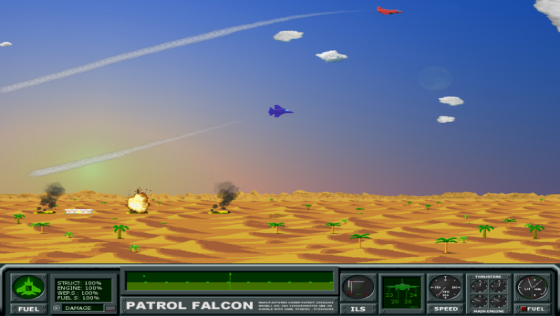