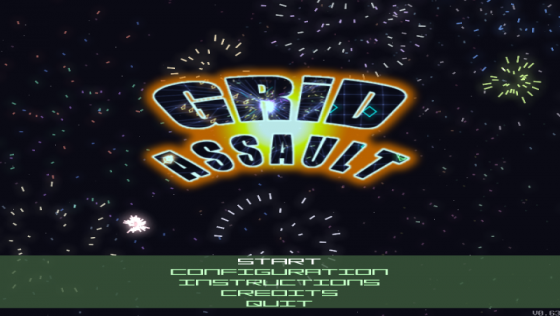 Finally, a decent Geometry Wars clone for the PC.

Love it or loathe it, you cannot argue that Geometry Wars is a modern day classic. With its fundamentally simple game mechanics, future-retro glowy-vector graphics and game-play ripped straight from the arcade classic Robotron 2084, it is no wonder that it was an all-out success story when released on the Xbox Live! Arcade.

Due to Geometry Wars' massive popularity it should come as no surprise that within a few months of its release PC-based clones of the exclusive Xbox game started popping up all over the internet. Some of these were blatant and shameless ports of the original (whereas as others attempted to 'improve' or adjust game-play elements) but as people in the remakes field are aware, remaking or cloning a game that is currently available to buy commercially is a good way to end up on the wrong side of a law-suit.

However, Wiebo de Wit managed to get it right. Fair enough, Grid Assault is without a doubt the closest you can currently get to playing Geometry Wars on a non-Windows 'Vista' PC (and it is definitely the best clone released so far), but he was careful to keep himself out of trouble by severely limiting the game to a maximum of six minutes per play (twenty levels). This may sound a little extreme, but it results in the game-play being more 'score attack' based, prevents players from getting bored of what is essentially a simple game and keeps the lawyers away due to it effectively being little more than a playable demo. 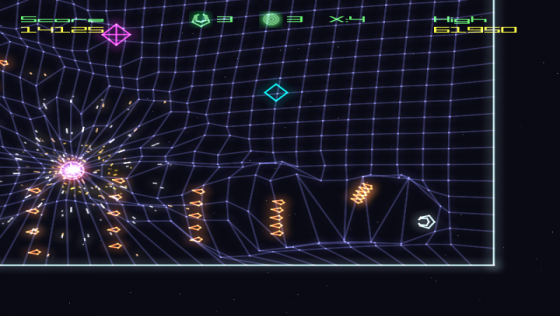 So how does it compare to the original? Well, to be perfectly honest, the most recent games console I bought was a Commodore CD32 back in the 90's and I've never played the Xbox version. However, the few Xbox owning friends that I have were eager to get a copy of Wiebo's clone for their PC's after playing a few rounds, which can only be a good sign.

Grid Assault supports both the use of dual-analogue joypad and the usual PC combination of mouse and keyboard, but it has to be said that although both methods play equally well the joypad method gives the player a far more authentic experience. The music is the usual spacey ambient-techno-fest that's common with abstract shooters these days, and the presentation is absolutely top notch.

In conclusion, Grid Assault is the definitive Geometry Wars clone currently available for the PC. Luckily, and due to the game's limitations, it's also the only rendition of the game that Bizarre Creations haven't closed down via a cease and desist letter.

The definitive Geometry Wars clone currently available for the PC. 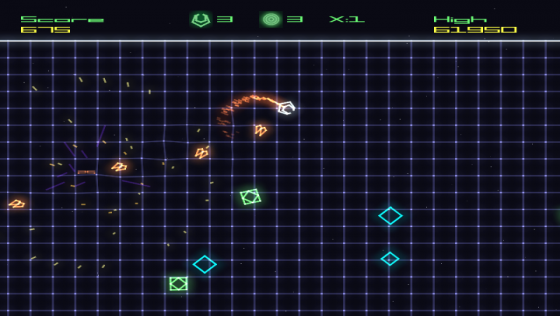 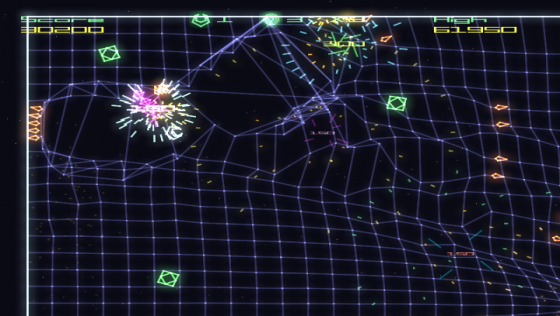