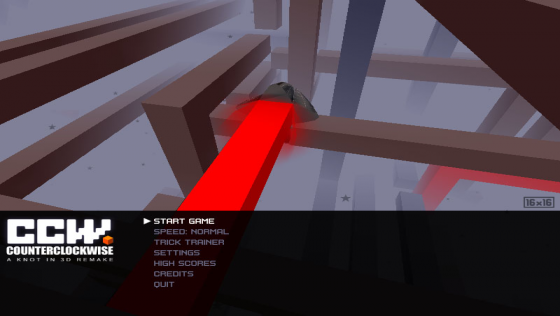 Knot-in-3D for the WipeOut generation!

As far as we at RGCD are concerned, Nenad of 16x16 was robbed in the recent 2006 Retro Remakes competition. Receiving a pitiful 4th place for his opus was clearly criminal when you take into consideration the calibre of some of the higher scoring entries. Regardless as to what the competition results may have led you to believe, Counter Clockwise is a very special game - in fact it only missed this issue's 'Featured Game' status by a score difference of one percent.

Before continuing, it's time for a brief history lesson. Back in 1983, New Generation Software released a game called Knot In 3D for the humble ZX Spectrum - essentially a three dimensional Light Cycles (aka Tron) game. Unfortunately, and primarily due to the limitations of the machine, Knot In 3D ended up as more of a technical demo than a playable game - it may well have been revolutionary for the time, but you'd be hard pushed to say it was actually fun to play. So ultimately, Knot In 3D was (on paper) a good game design, but unachievable in practice on the available hardware - making it an ideal project for a modern remake.

Counter Clockwise is a perfect example of what a remake should be. Nenad has taken the basic premise of the original and created an update with vastly improved playability, new game-play elements, and 21st century graphics and sound. 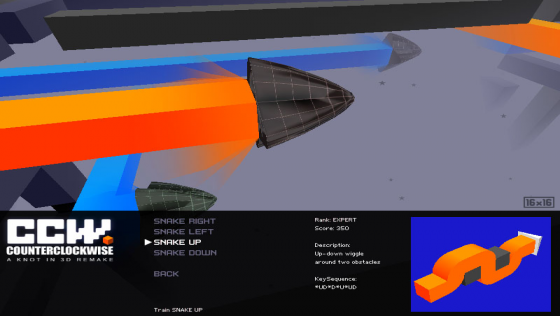 As already explained, the original game was a Light Cycles variant - the difference being in that the player was free to move in three axis (x, y & z) instead of the usual two (x & y). In a nutshell, the player controls a continuously moving craft that leaves a solid tail behind, and the goal of the game is to survive as long as possible by navigating through the three dimensional environment and avoiding the tails that are left behind the player and computer controlled craft. Nenad's remake is essentially the same, but with the addition of stunts (that award the player with both score points and power ups through the clever use of multipliers) - and most importantly, guns and smart-bombs.

The addition of a weapons and a stunt-multiplier based power-up system to the remake has resulted in the game being hugely more enjoyable to play. As with the original, to progress from stage to stage the player has to reach a certain score. However, the addition of these new game-play elements means that players can choose the game strategy most suited to their playing style, be it through either out-manoeuvring or out-gunning the computer controlled craft.

The control mechanism is highly intuitive, using the cursor keys for movement and the mouse for controlling speed and for firing at the AI opponents or destroying the tails blocking your path. Thoughtfully, Nenad has included the ability to fully customise the game controls (for those unhappy with the default set up) via the game's comprehensive menu system.

It has to be said that everything about Counter Clockwise is of high, if not commercial quality. As well as the future-retro Wipeout-inspired visuals and audio, there's even a stunt training tutorial to help new players get the most out of the game and the ability to upload your high scores to the game's website. All of the game settings can be adjusted to suit your computer's specification, right down to the HUD style and number (and density) of explosion particles. This level of attention to detail is rarely seen in commercial games, let alone freeware releases.

The only flaw in the game is in its longetivity - Counter Clockwise's simplicity is both its core strength and weakness. After you've mastered all the stunts and can build up massive scores the game leaves little to challenge the player. However, having said that, Counter Clockwise has still been one of the most played games during the creation of this discmag and is one that I'll definitely be coming back to many times again in the future.

All of the game settings can be adjusted to suit your computer's specification, right down to the HUD style and number (and density) of explosion particles. 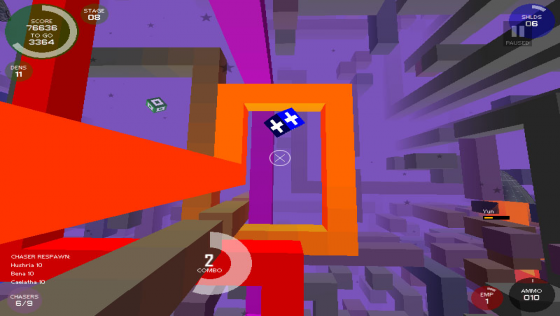 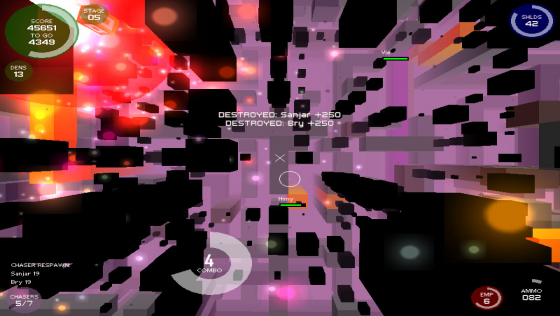