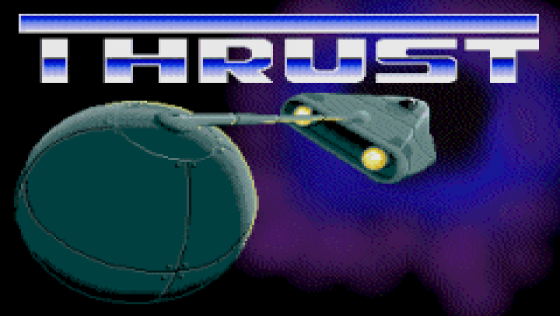 Originally released back in 2003, Grumpy Cat's acclaimed Thrust remake is hardly what you'd call a new GBA release, so you may well be wondering what the hell it's doing in a magazine dedicated to new retro releases and indie games. The reason is simple; with Grumpy's assistance and authorisation, we at RGCD are proud to present to you the first (of what will hopefully be several) re-releases of top homebrew games in cart form ready to plug into your GBA, SP, Micro or DS!

As is the case with other homebrew cart projects out there, these are 100% unofficial GBA releases and therefore this is a strictly non-profit project (the carts are sold on at cost price). However, it does mean that you get the chance to collect these strictly limited carts and play some of the best homebrew releases on real hardware. Anyway, that's enough self-promotion for now - on with the review.

This faithful remake is based on Firebird's Atari ST port of the BBC classic and features all ten worlds from the 16-Bit release (as well as the later reverse gravity and invisible wall variations), so fans of the original will feel immediately at home. For the few people out there unfamiliar with the game - and there really is no excuse considering that Wiebo de Wit's excellent Thrust Xtreme was reviewed in RGCD #01 - Thrust is similar to the arcade classic Gravitar (although with significantly more complex game mechanics) and it is famous for being one of the first home video games to feature realistic physics - and not to forget Rob Hubbard's excellent soundtrack on the C64. As always, the player's goal is to steal Klystron pods from a series of progressively complex mine systems, destroying the Empire's defences in the process (and even whole planets if you're going for a high score). 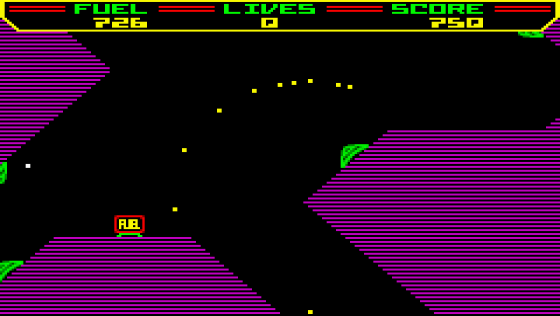 Somewhat surprisingly, the game works really well on the GBA - even when you take the handheld's tiny screen into account. Everything has been redesigned around the console; the graphics have all been redrawn and anti-aliased so as to look as smooth and vector-like as possible and the controls have been thoughtfully configured so that the d-pad is only used for rotating and the A, B & right shoulder buttons act as fire, thrust and shield/tractor beam respectively. It's clear that Grumpy is a massive fan of the original - a lot of love has gone into getting every part of this GBA tribute just right; the mechanics all work the way they should and Thrust's high difficulty is matched only by its equally addictive game-play.

At the budget price of £6.50 and strictly limited to less than 100 carts, Thrust Advance is a must-buy.

(Please note that there are two versions of the game contained in the .ZIP archive - normal and 'heavy gravity'. The latter is only recommended for Thrust veterans. Please advise us if you'd prefer to buy the heavy version on cart.)

Moral dilemma here folks, imagine this; the editor asks you to write a 2nd opinion for a remake that we're distributing on cart. Worse still, you've never played the original Atari game, or any version before. What if it sucks? What if it's not suited to the GBA? And worse still, what if it's another Bubble Dizzy? The pressure!

Thankfully two factors save me here. One, you can download the thing from the website to test it first and two, it's actually pretty damned good for a cheapie cart. It's simultaneously a game of skill, arcade action and strategy. It's also playable when you only have five minutes to spare, which is crucial for a handheld game (see my Blast Arena Advance review).

So dilemma avoided, this is a game that, especially for this price, genuinely deserves a place in your GBA grab-bag. It's a five-minute-at-a-time game, but there are going to be a lot of those occasions.

However, if I accidentally hit the abandon game button once more whilst playing it via an emulator, someone is going to die...

Genuinely deserves a place in your GBA grab-bag... It's a five-minute-at-a-time game, but there are going to be a lot of those occasions. 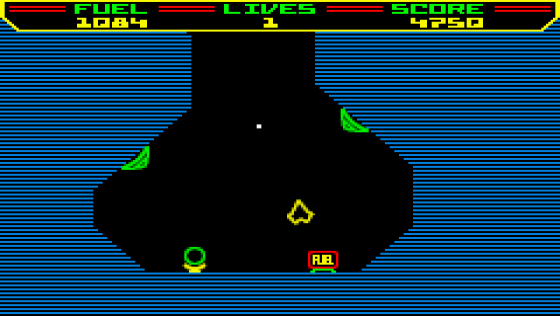