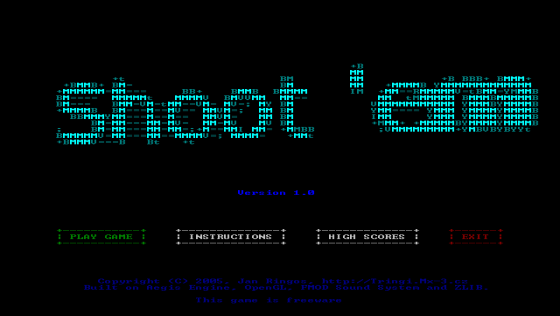 I've always thought that developers who choose to use ASCII characters in in games as a substitute for proper graphics were a bit lazy; if you're going to program a rougelike then why not make it a bit more visually pleasing? It's not as if we're still stuck in the dark ages of computing, using UNIX servers that lack any graphical capability, is it? Some people may accuse me of lacking imagination, but nonetheless, I fail to get excited about a hero whom is represented by an '@' symbol. However, and despite using text mode, I'm happy to say that Shoot 'Em isn't a roguelike - instead what we have here is a frenetic 3D shooter that uses ASCII characters in a completely different manner.

I had my doubts upon loading up Shoot 'Em for the first time; quite clearly Tringi has chosen to create a 3D ASCII engine as an artistic statement and proof of concept rather than sticking to the normal rules of game design. Although the game would be easier on the eye if a traditional 3D engine was used, Shoot 'Em is still a surprisingly enjoyable game, and although undeniably quirky, the text-based graphics work much better than you'd imagine.

The game itself is a simple shooting gallery affair, with the player controlling two guns (via the mouse) and tasked with the goal of blasting away the falling debris before it hits the grid at the bottom of the arena; death is inevitable, so try to score as many points as possible before the ever-increasing avalanche of text-based garbage finally overwhelms you. Ammo and explosive mines are strictly limited, and every time an object hits the grid you lose armour points - run out of armour and its game over. To assist you with your gunner duties coloured bonus objects also fall from the top of the screen amongst the debris, the different colours awarding you with extra ammo, weapon power-ups and armour. Not only that, but to spice things up a little the occasional highly-explosive mine is mixed in with the falling objects; fire a couple of rounds at one of these and everything in the vicinity is vaporised. 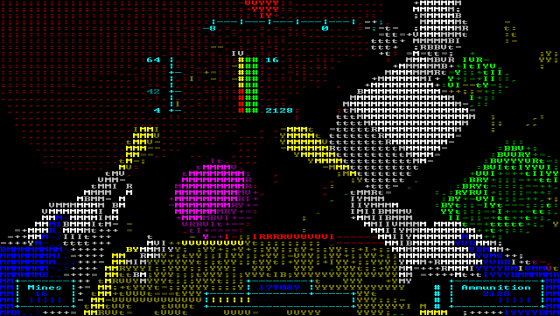 Shoot 'Em's audio is suitably hectic, with a retro SID-style soundtrack overlaid with sirens, meaty explosions, ricochets and sampled speech. Add to this the game's detailed instructions, animated 3D title screen and competitive online scoreboard and you've got a well rounded package that all squeezes into less that one megabyte of hard disk space.

There's not really a great deal of lasting appeal here; however, the unusual visuals mean that Shoot 'Em is the kind of game that you'll dig out once in a while to show off to your mates and have a laugh. The graphics are a bit harsh on the eyes as you have to squint a bit to see what's going on when the game-play starts to get really intense, and if you are used to a high resolution display I'd strongly recommend running the game in a window by hitting ALT+ENTER when it has finished loading. As for those high scores... well, unless you're capable of scoring over half a million (and my record is 250K) you're not going to even hit the bottom of the online top 100!

To conclude, I strongly recommend that you try out Shoot 'Em, if only for the novelty value. Behind the off-the-wall presentation lies an addictive and entertaining score-attack game and it's refreshing to see a non-conformist developer experimenting with unusual game concepts.

Graphics are a bit harsh on the eyes as you have to squint a bit to see what's going on... but it's refreshing to see a non-conformist developer experimenting with unusual game concepts. 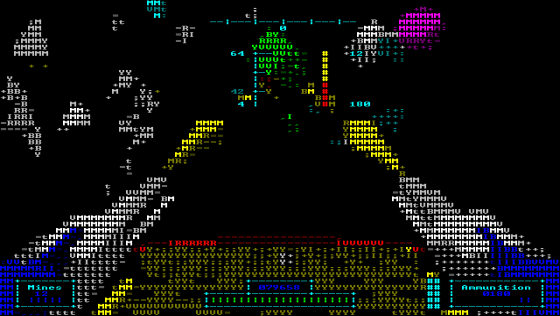 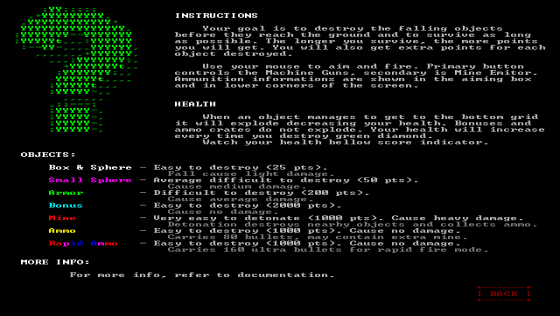