﻿ How To Be A Complete Bastard (Virgin) Review | Amstrad Action - Everygamegoing 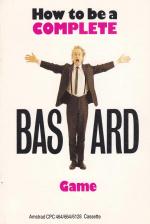 Anyone likely to be offended by bad language and gutter humour should skip this review and go straight to the Verdict box. Everyone else obviously had a misspent youth and can carry on reading, making schoolboy sniggers in all the right places.

Fans of the Young Ones TV series will undoubtedly remember Adrian Edmondson who played Vyvyan. Last year he published a book with the refreshingly down-to-earth title "How to be a Complete Bastard" Now, in similar vein, we have the game. You play a character by the name of Ade who has gatecrashed a yuppie party. Being your usual obnoxious self you decide to drive everyone away from the party by doing nasty things to people.

The screen is in two main parts which are the "-ometers" and the room display. The room display is split in two windows and is described as Bastavision. This allows you to see the room from two different angles. The view in each of the windows can be rotated so that you could have the same view in both windows, but that would be pointless - much like the game. Around the playing area are four meters which are the drunkometer, weeeometer, fartometer and smellometer. These all start the game at zero and build up according to your actions.

You start the game in the hallway and move around under joystick control. In every room there are objects which you can do various things to - most of them not generally recognised in polite society. To do something, you walk into the object and, while still holding down the direction key, you press fire. A menu will appear from which you can choose an option. By doing bad things you score points, and if you do something really nasty to a guest, then he/she will leave the game permanently. This causes one of the letters at the bottom of the screen to light up, a sign of true bastardliness if ever there was one! The nastier you are, the more letters that will light up.

The letters light up if you do something like put itching powder down someone's back, but the light will go out again after a while. To complete the game all of the letters must be lit up at the same time.

You can only carry two objects at a time while playing the game. The matches and the hammer can be used destructively and these are two of the objects that can be used many times.

The guests and you are plain looking, poorly animated and move around slowly. The rooms are drab and uninteresting with little to offer other than changes in the wallpaper. There is a good title tune, but in-game sound is restricted to bodily emissions of a gaseous nature - blimey, nobody smoke! A small tip here, don't blow off in the kitchen or you'll become part of Ronald Reagan's Star Wars project.

Juvenile humour is basically what this game is all about and, in that, it does its job well. After a while you will get sick of the lavatory humour and then the game will then end up gathering dust on the shelf. If you ever complete the game then I doubt very much that you will ever play it again. Don't forget, send any complaints to Virgin, and leave this reviewer well out of it.

Well I must admit I laughed my condoms off at first. Finding a condom and being given the option to put it on my head is not something I've done before. However, once you've made a few giggle-stricken discoveries, it does get tedious. A few comical graphic effects, speedier gameplay and more sophisticated humour wouldn't have gone amiss. It might give you a few laughs and it's the only game where I've ever turned into a gas cooker, but generally it's pretty forgettable.

Grab Factor 68%
P. Great fun being absolutely disgusting.
N. The nature of the game may cause problems.

Staying Power 50%
P. Fun for a while.
N. This sort of humour gets tiresome very quickly.

Overall 66%
A fun game but a bit more to do in it would be useful.

It might give you a few laughs and it's the only game where I've ever turned into a gas cooker, but generally it's pretty forgettable.