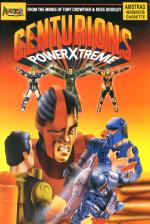 Yet another game based on a cartoon series has arrived for the Amstrad. Doc Tenor has attacked the Centurions Weapon Development Centre in an attempt to seize the experimental Tyron-Dichromate. The earth is in danger of being destroyed, so the team in the Exoframes must stop him from getting the chemical.

The game consists of three large scrolling landscapes which are inhabited by a variety of aliens. At the start of the game, you can choose which of the levels to start on. To travel between levels you need to find the six parts of a master key. You can control either a droid or one of the three Centurions: Ace for use in the air, Max for use in the sea, and Jake for use on land. In the two player game each player controls a different Centurion.

When several of the same type of alien have been shot a quant is deposited on screen which can be picked up so that a weapons pack is sent to you. There are eight types of weapon; each has its own benefits and some can have disadvantages, like the ring weapon which can end up killing the Centurion that's using it.

The playing area is very large and to get around it you have to use the Centurions in the right combination. This means there's a lot of exploring to do and many aliens to shoot while doing it. Many keys have to be found in order to progress through the landscape mazes to find the six parts of the master key.

The basic game concept of Centurions doesn't hold many surprises, the most interesting thing being the different weapons you can use. The large playing area will certainly provide a lasting challenge, but you may find the lack of variety in the gameplay rather tedious.

Find a piece of the master key.

Grab Factor 69%
P. Various weapons to use
N. Gameplay is boring, just lots of wandering around.

Overall 68%
Not quite what it could have been.

The large playing area will certainly provide a lasting challenge, but you may find the lack of variety in the gameplay rather tedious.