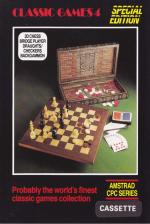 Four games for the player more concerned with mind than fast reactions.

Compilations are common enough these days, but for some reasons board games - even ones that have been notable successes - rarely get bundled. Chess, draughts, backgammon and bridge are the four mind games thrown into this package to keep you busy through some of these dark winter nights.

3D Chess was Raved (AA9) and proved a tough opponent for ex-editor Pete Connor. It has a good 3D display and is a joy to play, but suffers from absolutely abominable speech synthesis - or 'abloblolobloble bleep blinbleblib', as it would call it.

Bridge Player 3 (AA8: 58%) is reasonably laid out and has a challenging opponent for both beginner and intermediate level player. (Beginners will need a book or they won't know what the heck is going on.)

A pile of thoughtful play here. It may not appeal to the arcade game fiend, but anyone who wants a game of something more mentally stimulating than a mere test of dexterity should find this a cheap and worthwhile purchase.

Overall 64%
Four games for the player more concerned with mind than fast reactions.

Anyone who wants a game of something mentally stimulating... should find this a cheap and worthwhile purchase.
Logout