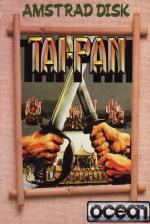 Tea-Pan is a trading game set on the China seas in the 1840's. It is based on James Clavell's book of the same name and has you in the role of Dirk Struan, a penniless trader, whose desire is to become extremely rich. Tai-Pan is the title given to a merchant prince of the Far East.

The game starts with you having no ship or money and your first task is to obtain a loan. To do this, you go to the restaurant where you can meet with someone who will give you a loan of $300,000. Next stop the bank where you have a choice of which of the three types of ship to buy. You can only afford two of them and the cheapest is probably the best bet otherwise you may not have enough money for cargo and crew. Money can also be lost or gained by gambling in the restaurant.

Crew can be obtained in two ways; the first is by going to the Inn and hiring them and the second is by press-ganging. A hired crew is more reliable, but a press-ganged crew is free.

Cargo is bought and sold at the warehouse. The hold of the three types of ship dictates the quantity of cargo you can carry. Make sure you stock up on food from the supply depot, otherwise you run the risk of mutiny when your crew becomes hungry. Cannon balls and musket shot can be obtained from the armoury so that you are not defenceless when out on the high seas.

To leave the port, you go to the harbour and then the sailing section of the game is loaded. During this section of the game, you control the speed and direction of the ship. One of the icons allows you to shoot at any passing ships and so you can take up piracy. When you reach another port you set off to the warehouse where you can sell your cargo and buy another load.

The date is updated from time to time and if you fail to pay off your loan within the time limit you will have your head surgically removed. Play continues until you either die or become Tai-pan. The game can be saved or re-loaded at any time.

The graphics can be summed up in one word - appalling. They are chunky and the animation is not very good either. A tune plays continuously through the game. It does add to the oriental atmosphere.

The main problem with Tai-Pan is the time spent loading the town and sailing sections during play. It spoils the flow and makes it seem less like fun and more of a chore. The graphics would have been better left out and the game loading in one go rather than multi-load. The mixture of strategy and wandering around town buying and selling does not work very well and it would have been better as a pure strategy game.

Definitely an opportunity missed here. If could have been the Elite of the high seas, but ends up spending too much time with ineffective graphics and not enough time doing things. However, I'm a sucker for this type of game and will probably keep trying to build a fortune.

Graphics 40%
P. The icons look good.
N. The rest of the graphics are terrible.

Sonics 74%
P. Good tune plays throughout the game.
N. Not many spot-effects.

Grab Factor 64%
P. Exploring the China seas is fun.
N. Finding your way around town is tricky at first.

Staying Power 72%
P. Becoming Tai-pan will take you a long lime.
N. Especially with waiting for the different sections of game to load!

Overall 66%
P. A nice idea which is badly executed.

The mixture of strategy and wandering around town buying and selling does not work very well and it would have been better as a pure strategy game.