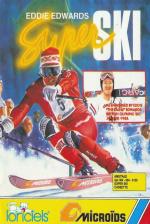 Britain's Olympic failure, Eddie Edwards, has lent his name to a skiing game from France. Will you do as well as Eddie in the four events that you get, or will you manage come somewhere other than last?

On the screen you get a rear view of the skier with the snowy landscape in the distance. To the right is an indicator to remind you of which event and which player's turn it is. At the bottom of the screen is a digital display of time elapsed since the event began and the number of gates that you missed, if appropriate.

There are four events in all: the slalom, downhill, jump and giant slalom. Before play begins you get the choice of training or competition play. Training is a single player game where the same event is practised to perfect your technique until you quit back to the menu. Competition is for up to six players, you compete against each other and must go through all four events. You have two attempts at each event and the scores are added together.

The ski jump is probably the easiest of the events to do. It's simply a matter of going down the ramp and flying through the air. While in the air, you can lie really flat to get that extra bit of distance, but if you land that way you'll end up with a mouthful of snow. In the downhill you have a course clearly marked and you have to get to the end of it in the shortest possible time. Gates appear occasionally and failure to go through them adds to the penalties.

Both of the slalom events have many more gates than the downhill and if you don't pass through them the number of penalty points goes up. Points are awarded at the end of each course according to how fast you completed it and points are subtracted for penalties. Your first few races will end with a score of zero in all probability, until you know the course. The two slaloms and the downhill each have three different pistes to race down. Of the four events, the ski jump is the one you'll tire of first because there's only so far that you can jump.

During the championship, the scores for every player are displayed at the end of each round of the contest. After all events have been played the winner is declared. Then it's just a matter of beating high scores.

Sound is virtually non-existent, you go whoosh down the slope and that's it. The graphics on the other hand are very fast and colourful. To get everything fast the movement of the background is jerky, but you won't really notice it because just trying to stay between the flags is tricky enough.

It's fun to play to begin with, but in the long term there's not really that much to do. You can beat your high scores and set faster times, but there's nothing else to it. The multiple player option will add a little to the competitive spirit, but not that much.

The game is certainly a lot better than Eddie is at ski-jumping - but that's hardly a demanding task. The events are proficiently put together and convey an excellent impression of speed. What they lack is variety. The three races are very similar in nature and it's simply a matter of perfecting your style and learning the various runs. Why don't your glasses steam up so that you can't see where you're going?

Get a non-zero score on one of the races or 57m on the ski jump.

Grab Factor 82%
P. The potential for up to six players adds to the interest.
N. Unless you're a sports game fan you may not find it exciting.

Overall 76%
P. Great graphics and fast-moving action...
N. ...but not really enough game in there.

Great graphics and fast-moving action, but not really enough game in there.