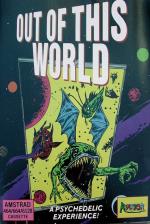 The RP2-16 jet fighter is the fastest and most powerful aircraft of its kind in the world. It has a top speed of 0.9 times light speed. You were the test pilot and felt that, with a bit of a push, you could take it beyond the speed of light. A quick burst on the Quark cannon and the speed increased to that of light and you were hurled into another world...! On arrival in the other world, you find yourself under attack from an assortment of aliens.

At first, it appears to be just another Defender clone with horizontally scrolling graphics and wave after wave of aliens to obliterate. Some features have been added to make the game different, extra weapons, bonus levels many more types of alien. There are seven types of weapon which include firing to the front and back, four-way firing, three bullets, seven bullets and a "destroy everything in its path" weapon.

To add a weapon to your ship, you have to collect "coins" - which appear sometimes when the alien ships are destroyed. On the first level you need to collect four coins to add the weapon to the ship and the number of coins increases as you go up to the next level. When you are in the situation that one more coin will give you a weapon, the coin flashes. Unfortunately the weapon is not a permanent addition to your firepower and after a time it ceases to function and another must be collected. Only one extra weapon can be used at a time When you go to the next level all unused coins are discarded.

Aliens tend not to like being shot and so they do their best to annihilate you. There are many types of aliens and they move in different attack patterns On higher levels, some of the aliens shoot back at you and if they bump into or shoot you then one of your five lives is lost. The aliens appear at random in groups of three and sometimes they materialise right where your ship is, frustratingly resulting in your demise.

There are eight levels to complete and seven bonus screens. To go to the bonus level, you must collect a letter "B" that appears on screen periodically. In the bonus level, you merely have to survive until the end of the wave by shooting or dodging the incoming aliens. After the bonus wave you go forward to the next level in which there is a new landscape and more dangerous aliens.

A good tune plays on the title screen and in-game effects are more functional than anything. There is nothing wrong with them as such, but they do tend to irritate you after a while. The smooth-scrolling landscape extends into the border of the screen and is a small chunk of screen which wraps around at the edges. The landscapes are very colourful, and so is everything else for that matter. Sometimes the aliens or the ship merge with the background and you can't see where you are going or who is around you.

There is not much thought required in this game, but it's a fast and addictive shoot-'em-up that will keep you blasting away long into the night. Eight levels may not sound like much, but they do get hard very quickly. Probably one of the best zap games in recent months.

Deliciously smooth horizontal scrolling, fast action and superb graphics make this a very scrumptious game. Although not top in the originality stakes, it's great tor a relaxing - and challenging - blast.

Some things are tricky to see in colour and even more difficult to spot in green.

Overall 77%
A worthwhile addition to any collection.

A worthwhile addition to any collection... Eight levels may not sound like much, but they do get hard very quickly.