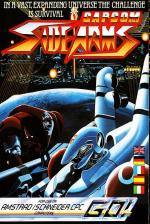 The Earth and its population is yet again in danger of extermination. You must save the planet from destruction at the hands of the tyrannical Bozon by fighting your way into the heart of his empire and defeating him.

At the bottom of the screen is a panel that shows your speed and the five different types of weapon that you can use. There's a lives and score indicator at the top. The rest of the screen shows a side-on view of your space suited character, as he travels over the horizontally scrolling landscape.

The landscape scrolls slowly from the right and all you have to do to go to the next stage of the game is stay alive until you reach the end. Aliens charge towards you in a variety of forms: some come at you kamikaze-style, others drop in and shoot at you and then there are the worms that follow you around.

Extra weapons are obtained from objects that appear on screen after you've killed certain aliens. There are seven different objects: speed up, slow down, three-way shot, mega bazooka launcher, auto, bit and multi-shot. The speed up and slow down alter your rate of fire, three-way shot produces three blobs that take different trajectories and the bazooka produces a thick powerful laser bolt. Auto is the only weapon that fires repeatedly without you having to bash away at the fire button. Bit is up to three blobs orbiting around you each one fires a laser bolt. The multiple shot capability gets better each time you collect one of the appropriate objects.

A jolly tune plays continuously and the sound effects are adequate. The scrolling is smooth, but there is flicker in the graphics.

It's good fun to play as a simple shoot-'em-up, but there's little variation. The end of level aliens are very easy to defeat, especially if you have auto or bit. Plenty to blast, but nothing you haven't seen before.

What can you say about a perfectly reasonable shoot-'em-up? It's undemanding, fun for a while and much like many others of the genre. Graphically it's quite impressive, apart from the lack of detailed scenery. It should appeal to fans of the arcade game, but doesn't offer anything to set my pulse racing.

Just as easy to play in green.

Overall 68%
More variety would have produced a much better game.

More variety would have produced a much better game.