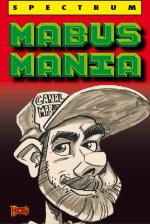 Since the Arcade Game Creator came out for the Spectrum, a steady stream of new games have been created with it. Some have been quite good, others less so. Mabus Mania is a very likeable serial platform game - and not just because in it you have to find all of your retro computer games which your long-suffering wife has finally thrown away.

No, this new game from Oscar Llamas (https://hicksretro.itch.io/mabusmania) has got it all - speed, reasonable graphics, an accompanying tune that you can't get out of your head afterwards and a perfectly-pitched difficultly level.

All you have to do on each level is run left and right, jump between platforms and collect the two games. After that, you must take them to your computer, and then find your way to the door to exit the level. It's very much a speedier and more colourful version of Manic Miner, with a few less items to collect.

Alright, it doesn't do anything new, it doesn't push any boundaries and it's pretty similar to a hundred other platformers. But it's addictive, and the time limits for each screen are tight, so that you can be picked off and be chomping at the bit for another try.

I'd have liked to be able to practise any level at will rather than have to play through them all again when I inevitably lost my last life. But other than that, this is a nice little budget game for Speccy owners, and one that they might well come back to a number of times.