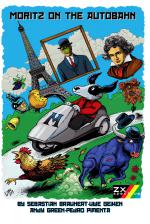 Moritz On The Autobahn (Team Moritz)

Moritz On The Autobahn

This review is being written as countries across Europe are coming out of COVID19 lockdown, so there's probably a fair smattering of Spec-chums hankering after a European roadtrip. Realistically however, it's still not possible, so you may like to content yourselves with a virtual one in the form of Moritz On The Autobahn, a platform game for the Spectrum 128K only.

Moritz On The Autobahn stars everyone's favourite Spectrum canine hero, Moritz, who is popping up every couple of months in one guise or another. Here he's squeezed into a C5 and his final destination is Portugal. A sort of cartoon-like plot in a game that doesn't take itself too seriously.

To complete each screen, which is accessed serially, you must collect the hearts (Yes, Mikie-style!) by running or jumping into them, and then run to the traffic light. From initially easy screens, they get progressively more difficult, playing not only with more cramped areas but also with the perspective itself. This last aspect is a bit confusing but you soon get used to it.

A number of tunes accompany the action and you get eight lives with which to tackle the game.

There's nothing here that you won't have seen a hundred times before - patrolling nasties, disappearing platforms, a cutesy protagonist - and there's nothing really to tax your brain. This is one of those games you can simply 'pick up and play'. If you're a fan of the Moritz series, you'll probably like it immensely, particularly if you were confused by Moritz The Striker (as I was!). It's run and jump only, but punctuated with a few cut-scenes. Graphics are fair, music is great.

I didn't find any real frustrations with the game: collision detection is generous, and Moritz can fall from any height without dying.

Unfortunately, because it doesn't do anything new, there's no wow factor. Easy, serially accessed platform games are, generally, pretty forgettable. Here, although some of the screen layouts are imaginative, I think a seasoned platform game player will run through them in next to no time... and find them quite unchallenging. By no means does that mean the game is boring to play; more that, once completed, you won't find yourself returning. Mind you, you probably won't need to as Moritz will probably have returned in another game competing in the Ryder Cup or the Winter Olympics by then!