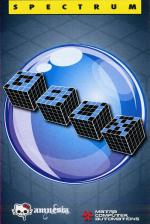 There are retro games, and there are retro games, right? Qbox is a real blast from the past. Right back to the days of Marble Madness and Qbert, in fact, and, as with those classics of old, there's no backstory or scenario. There's simply a task, and in Qbox that task is to roll a sphere around a cubic domain avoiding the roaming nasties and collecting up the objects.

There's a basic loading screen and then you're chucked straight into level one which presents a monochrome screen showing part of the map. If you reach the edges of it, you flick-screen to the next section. Whilst this works, this is a bit odd as a game mechanic. I am more used to games of this type scrolling, but it's no big deal, you can always see if there's a block or space in the area you're about to roll to. Alas, there does seem to be the occasional lag with the game controls though. A few times I rolled past the area I was trying to move to, and the game then responded to my command late... and then it *did* roll my sphere right into space. And that was really annoying.

The object of each screen is to collect all the "Qbits", which are numbered 1, 2, 3, etc. You have to collect them in ascending order, although they do not obstruct your passageway if you don't do this. You simply pass through them rather than pick them up. Finally, after you've collected all the Qbits, you have to proceed to the transport pyramid to complete the screen.

This being a cubic domain, there is an impression of gravity and, if you're used to games like Alien-8 or Sabre Wulf, you might be initially be confused by the limited (four) direction keys as game controls. Like in those games, you will fall off the edges of blocks. But, unlike in those games, you will automatically re-jump back to higher blocks without needing to press a jump control if you simply move your sphere that way. This makes the game feel a bit like Qbert, and is doubtless why it has a similar name (Qbox).

Your sphere has an energy bar rather than a lives system, and sometimes it's not possible to completely avoid the domain's nasties - you simply must pass through them to make progress. If you do realise this is the only way to complete the screen, you want to limit the energy-draining contact with them by rolling towards them as they roll towards you. However, not all enemies follow set routes, some move at random, and you can be unlucky and end up seeing your energy wiped out and the loss of one of your four spheres.

On the death of the last sphere, you are flung back to the title page with no high score table and no password system. You have to start the whole game all the way from the beginning again! This is a great shame because sometimes, through no real fault of your own, you just won't be able to complete one of the screens. To give you an example: there are some tiles in the cubic domain that disappear after you roll over them. So, if you roll over them, get killed and then get reincarnated at the original start position, you now cannot cross to where you need to be. Only thing for it is to kill yourself and restart the screen. But, of course, you cannot restart the screen, you have to restart the entire game. This means a single mistake leaves you totally stuffed and has a devastating impact on your desire to replay a second or third time.

I'll say one thing for Qbox though, it's a brilliant advert for the Arcade Game Designer... it's unlike anything I've ever seen before that has been designed with that system.