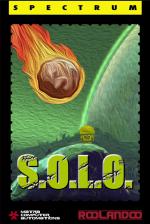 I don't know how many Spectrum games have now been written with the Arcade Game Designer (AGD) but it must be many hundreds. And try as an author might, it's becoming very difficult to write anything with it that, to the player, doesn't immediately feel overly familiar. Not that that's necessarily a bad thing if you really like games in that style of course. And for the sake of those few readers who have never played a game authored with AGD, by "that style" I mean Manic Miner-style platform/puzzle game style.

In S.O.L.O., you take control of a robot on a distant mining planet. You can walk left and right and jump or crouch. Crouching has the effect of making you only half your usual height, which is useful for avoiding the overhanging blue, um, stuff that will otherwise see you lose one of your four lives.

The basic elements of a serial platformer are all included here. There are patrolling nasties to jump, and you can fall from any height without issue. On each screen you must collect the key and make it to the door. However, it's not quite as easy as that because usually the key is located in some hard-to-reach place that you can only get to by, first, collecting the, um, glowing thing. The glowing thing gives your robot an upgrade, usually allowing him to fly or shoot, and it is this upgrade that allows you to reach the key.

You can deduce how to complete the early screens quite easily, and there are some nice touches, like the computer which gives you a totally pointless weather report, and the boppy background music on the 128K version. As you clear the first few screens you progress from the initial caverns to outside areas, allowing you to gain more of an appreciation into how big S.O.L.O. actually is. Answer: not huge, but certainly not small.

Your objective is to get through all of the screens and shut down the power grid and, as you might expect, the puzzles get progressively tougher on each successive screen. There's a nice variety to some of the glowing things giving you slightly different upgrades too - such as one key which is surrounded by ice and collecting the glowing thing allowing you to burrow through the ice to reach it.

S.O.L.O. isn't a bad game and it shows some imagination, but, being written with AGD, it can't hope to compete with the likes of Aliens Neoplasma, or the latest Denis Grachev title. I'd say it's an average game, and with a physical cassette version at £7.99 (through Matranet), it comes with an average price tag. It's worth a look, although I really don't think you'll play it for very long.