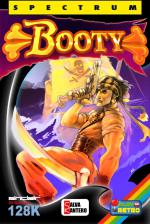 For a flick-screen platformer, there's a surprising amount of stuff packed into Booty. The original game graced a number of formats in the early Eighties and this remake does the format proud. Ahem, if you consider remaking something with exactly the same game mechanics to be worthwhile, that is.

In Booty, you play Jim the cabin boy and your job is, unsurprisingly, to collect up all the booty from each of the platforms on each of the screens. The booty is in the form of pearls and treasure chests which are scattered liberally across each screen, and picked up automatically as Jim runs over them. As you might deduce simply from its title, it's all got a distinctly piratey theme, with the screens designed to look like the lower decks of a boat.

Progress through the screens of Booty is quite unique, in that you don't run out from screen left and appear on a new level screen right. Instead the cabins of the ship are linked by doorways and you move from one screen to another by standing outside of these doorways and pressing Space. Even more originally, you have to collect up the keys as well as the booty to make any sort of progress, and the unique game mechanics of these keys made the original game such a classic.

On each of the screens in Booty, there are up to eight doors, and up to eight keys to unlock them. You can pick up a key by running over it, and subsequently unlock the door that that key corresponds to by running into it. So key 1 unlocks door 1, key 2 unlocks door 2, and so on. However, there are a number of obstacles to simply grabbing a key and unlocking the appropriate lock. Firstly, the platforms of each screen are patrolled by roaming swashbuckling types who are not impressed with your philandering ways. And secondly, if you encounter a different key on your travels, it will not only "swap" itself for the key you were originally carrying, but that key will move back to its original place on the map. With only left, right, up and down controls (i.e. no jump control), keys can get in the way of any plan that you make, meaning you need to strategise about the order the keys should be collected.

Strategising will often reveal that the screen before you is not possible to complete without making use of the doors which take you to neighbouring rooms, and re-emerging in a different position.

And if that all sounds very complicated, well, that's because it is. Booty is an arcade game, no question about it, but there is an order in which screens must be completed, making it a collection of small puzzles all linked to a much bigger one. There are the usual staples of platforming fun - moving platforms, elevators, drops and ladders - but there are also a few features that take you by surprise. When you collect some of the booty, for example, a bomb appears, fizzes for a few seconds and then blows up. If you're standing anywhere near it when it does, then it's curtains for you. Likewise, a parrot emerges at random and flies slowly from one side of the screen to another, finishing Jim off if he collides with him en route.

The skill of the game comes in evading all of these obstacles, and it's possible to do so because your character runs much faster than anything else on the screen does. Unfortunately, this isn't always the boon you'd expect because the floor is a bit slippery... which is why when a parrot or a bomb unexpectedly appears in your path, it's not all a simple matter to avoid it. There's a "safe" spot between the ladders that connect the platforms and I get the distinct impression that every screen can be completed without losing any lives at all. But there are little quirks of the game to familiarise yourself with too - the little leap that Jim does when he reaches the top of a ladder wastes valuable fractions of a second, for example. And the outer limits of every screen are dangerous places to stand in case the parrot puts in an appearance.

If you've played the original then you know all this already. So the real question is what has the remake got to offer you? Well, um, the answer is not a lot. It doesn't do anything new with the format, it's just exactly the same game coded up by a different development team. It's rather like when Gus Van Sant remade the Alfred Hitchcock movie Psycho, almost shot-for-shot, and received a near-universal critical shrug of the shoulders response.

Now with Booty The Remake, it's not quite that bad; like the original it is very playable and the music is fantastic. However, the decision to dispense with the colour of the original in favour of very detailed monochrome levels is an odd one. I found it often difficult to pick out Jim against the background, particularly when entering or exiting screens, and, exactly like the original, the gameplay itself is a bit too repetitive to be fun for longer than ten minutes or so. The monochrome screens gave me eye-strain too.

Nevertheless, it is a polished game. It's smoother than the original and apart from its monochrome nature it's hard to fault. If you're intending to download it then by all means do so; it's pretty enjoyable for a Spectrum game. However, recall that the original was a £1.99 budget title. Matra's physical release of Booty The Remake is £8.75. Even allowing for inflation, I'm not sure if it's worth twice the amount of the original... Oh, alright maybe it is worth it. Just.