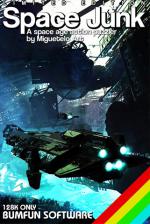 Appearances can be deceptive... Space Junk looks like it'll be like a thousand others. But Dave E finds it's actually quite a unique little puzzle game in its own right.

This is a good game. Really.

I know Spectrum owners these days have a lot of software to choose from (and a great deal of it is yet another AGD-written platformer). But Miguetelo (or Matra, or Bum Fun) has got hold of a good idea here. Hence, although it is written using Jonathan Cauldwell's AGD, you wouldn't actually know that that was the case if the game wasn't honest enough to admit it.

If I were to have to describe Space Junk in a sentence, I'd say it was a puzzle game requiring very quick reactions. If you've cast a look at the screenshots illustrating this review, you may well be surprised by that description. Fairly obviously, Space Junk looks like more of an arcade game. Most game scenarios that pit a spaceship on a quest to wipe out malfunctioning generators demand more arcade skill than logical thinking, and what makes Space Junk different is all down to the control of the spacecraft itself.

Not being one of those people who sits and thinks things through (and the instructions being silent on the matter), the spacecraft doesn't move as you might expect - left, right, up and down move it around the overhead mazes without problem, but each tap of the controls also turns it through 90 degrees. Which means, if you're not careful, it'll end up facing away from a threat rather than toward it. And if it's not facing toward it, then when you fire, your bullet is going to fly off in the wrong direction.

So, in a densely-packed maze, the puzzle element of the game is in using the walls, corners and cavities, to somehow navigate your spacecraft so that it's able to not only travel through the corridors but also ends up facing towards each generator when it needs to zap it. It's good puzzling stuff, and you need to think harder and harder as the levels increase.

The background music (on the 128K version) is pretty good, and the graphics are also reasonable. With only 21 levels, it's only a small game but it's an addictive one and, even after you complete it all, I do think it's one of those puzzlers to which you may well come back to after a few months.

I'm not quite sure why it's available from both Bum Fun and Matra, or why Bum Fun has chosen only to release the 128K version of the game whilst Matra has gone for a (more sensible) flippy with the 48K musicless version on one side and the 128K one on the other. At either £7.95 (Matra) or £9.95 (Bum Fun), it's good enough to splash the cash on for sure, although you can also download it completely for free from all the usual Spectrum download sites.