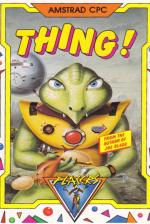 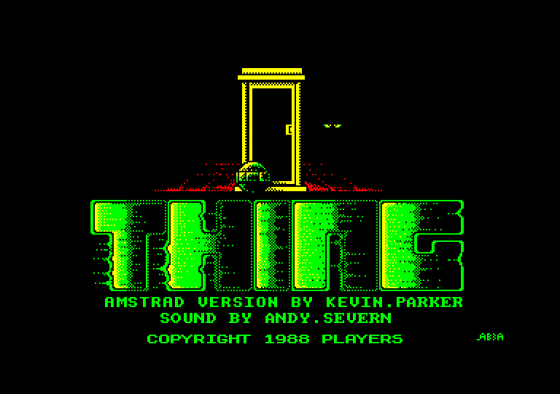 Planet Rombus has small spherical occupants composed of squashy insides and a hard silica shell. Their political advisor, the Ball, is off to see the Dingalinger Overlord. Thing is an intergalactic postie who's assigned to deliver the Bali, but the Ball is in a playful mood and refuses to go until Thing (you) has solved ten simple tasks. (Whaddya means sounds silly?)

You've a list of objects carried, commands, the day and a third of the screen with a horizontally scrolling playing area in which you stand. Ball floats just behind him and can fire at anything hostile that heads for you. Each time you're hit dam-age is sustained and after a certain limit is reached you fall unconscious for a day. The game lasts a week. 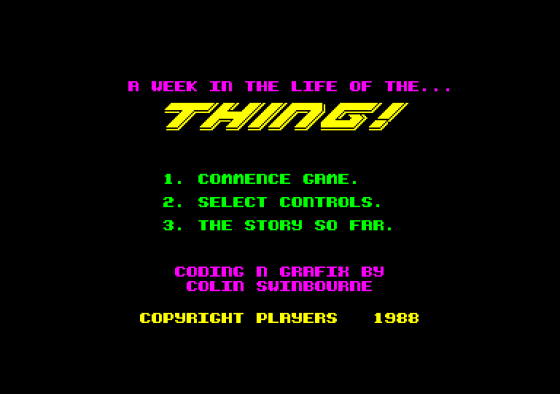 You start, the game standing next to a telephone booth and carrying a directory. If you 'use' the telephone you're asked for a destination from a to z, each letter being a different zone to the game. Objects are littered around the zones floating in canisters, and may be taken from them and carried to other locations to help you solve the ten tasks. Objects can also be examined and you can abort or pause the game. A status panel can be called up to let you know how things are going.

Little colour is used and the scrolling is smooth, but. slow. The sprites of Thing, Ball and enemies are nice. Sound is footsteps and shots and a title screen tune.

At first, it looks a cute game with nice sprites and some problem solving to do. After a few (very few) minutes however you got bored: all you do walk around (incredibly slowly) and try to find something to do. Unless you have the patience of a saint, look elsewhere for excitement, adventure and wild things. 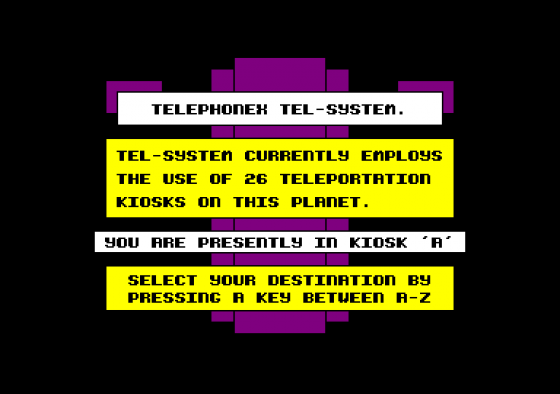 For anyone above the age of, what, ten, it's dreary and dull - why have someone walking so slowly? - but perhaps for anyone younger than that who's easily amused, it could be a hit. Just don't make me play it.

Overall 44% Worth a budget price - if only just.

Smooth scrolling graphics but boring after just a few minutes. 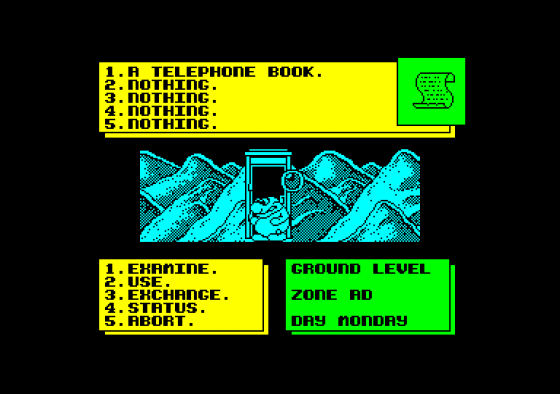