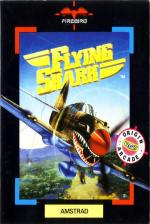 The battle is drawing to a close and your side looks to be coming out the loser. High command have one last chance to turn the battle around and you're it, the greatest combat ace of all time. You must go on a lone mission against superior enemy forces - everyone is depending on you.

It's a vertically scrolling shoot-'em-up with you in the pilot seat. Ignore the cassette artwork that shows a monoplane, because you're definitely chugging about in a bi-plane. On screen is the playing area in the centre with a status panel for each player on either side. The status panel shows your score, lives and smart bombs. There is a two player option but it's not simultaneous action.

There are a variety of enemy air and ground based units that attack you, trying to bring your mission to a halt. Tanks, planes and anti-aircraft guns all hurl lead in your direction. Tanks take two hits to be destroyed; the first destroys the turret, stopping them firing, and the second finishes them off. The small planes can either be hit in the engine so that they explode or hit elsewhere and they then spiral downward to impact on the ground. The larger planes take more hits before they explode. Anti-aircraft guns also take several hits to destroy them. There are also the sea-borne equivalents of the above enemies: battleships with gun turrets and gunboats.

By shooting the right enemy formation you can get get bonus squares. An "S" adds to your aircrafts firepower; the "B" gives you another smart bomb and the numbered squares give you bonus points. The extra fire-power means that you fire multiple bullets rather than just a single one. Smart bombs destroy everything on screen, or cause damage to some of the more resilient obstacles. The extra firepower is crucial for quickly dispensing with the tougher enemies, so make sure you always get hold of it.

If you shoot an entire formation of aircraft when the 1-Up symbol is flashing then you gain an extra life. Extra lives are also awarded at 50,000 points. 150,000 points and from then on every 150.000 points. Every time you lose a life, you're sent back a short way and have to fight your way through again.

At various stages you will run into large obstacles that really take some hammering before they are destroyed. There are enormous tanks and, the battleships and, at the end of level one, a huge, multi-turreted aircraft carrier. At the end of each stage you land at an airstrip. Bonus points are awarded according to how many smart bombs you have left and then you're off again to blast more foes.

The graphics are disappointing; they've been ported across from another machine and use very little colour. There's plenty of detail on the backgrounds and weapons, but the lack of colour makes the bullets hard to see. The scrolling is smooth and it's generally well animated. There's a good title tune, but the effects within the game are poor.

It's another in the stream of arcade conversions, but at least it's a fun one to play. A simultaneous two player option would have been much appreciated though.

Grab Factor 77%
P. Easy to get into the shoot-em-up aspects of the game.
N. Frustrating when you're killed by some-thing that you can hardly see.

Staying Power 71%
P. It'll take a lot of blasting before you reach your final objective
N. Not much variation in gameplay.

Overall 73%
A demanding blast, but it does lack speed.

It's another in the stream of arcade conversions, but at least it's a fun one to play.