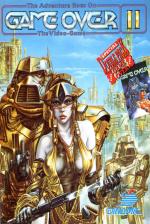 Game Over was favourably reviewed in AA25, and now (with similarly subtle artwork - why is the software industry so sexist?!) here comes the sequel. As a bonus - and a substantial one at that - you get Game Over free.

At the end of Game Over, devotees may recall, the hero Arkos had defeated the evil Gremla and there were wild parties everywhere that lasted as late as, ooh, half past seven. Unfortunately in the general merry-making, the hero was forgotten about and, when no-one was looking, he was captured by Gremla's heirs. Poor old Arkos was shipped off to the terrible prison planet of Phantis and shoved into a deep, dark dungeon to rot. Letting the hero die is not really on, however, and a rescue mission is launched by yet another hero (go on, guess...!).

There are two different parts to the game, loaded separately, and a password - which you get by completing part one - is required to enter part two. Part one is divided into four phases: approach, volcanic, underground and swamps.

Bonus lives are awarded every 25,000 points and you're gonna need them to get far. In the approach to Phantis, you encounter the suicidal hordes that fly and shoot at you, and they're definitely not aiming to miss. Asteroids are just as deadly but, like the enemy ships, they can be blasted with some well-aimed laser bolts.

After flying along for a while you reach the area of volcanic activity in which balls of magma, bombers and missiles endeavour to destroy you and then reach the underground cavern and its snaky occupants. Three shots in the head are needed to brain the serpents. Phase four is just after landing in the swamp-infested landscape. After capturing Adrec, you can ride around stabbing at bad guys with your photonic blade and eventually you get the password to the second half of Game Over.

Now you have six levels to pass through before reaching the prison cell: surface, alien base, underground forest, inner lake, magma and prison. The planet's surface is very mountainous and is occupied by some not-so-friendly aliens called the Pelotrones. They die with the aid of your own rebel Pelotrone. Once you're inside the alien base, you have to take control of the Ionic turbo laser and its proton loader to arm you to full power. Hidden in the underground forest is a medallion which you need to open the Blue door that leads into the inner lake. Piranhas and dinosaurs lurk beneath the hot waters and care has to be taken as you head towards the heliport.

Once inside the helicopter, you have to fly through a hazardous cavern filled with molten rock and you finally reach the prison level. Some little devils are guarding the prison and, once they've been dispatched, your mission is over.

A pleasant little tune (if a bit tinny) plays on the title screen, but there isn't one during the game itself. Sound effects are alright, though they too are a bit on the tinny side. Horizontal scrolling is fine and there's plenty of colour, although a large portion of it is blue. Green screen players, may have occasional problems seeing things.

Game Over was a fun shoot-'em-up, and this is a good game too. Getting the original and a sequel makes it good value for money if you haven't already got Game Over, and it's not so bad on its own anyway. My only doubt is the difficulty factor: your first few games will be short-lived, but it doesn't take long to get to the end of the first part of the game. Worth a look, without a doubt.

Some really nifty graphics on this one; really mean for the CPC. The gameplay is pretty frantic at first: you'll need a good joystick. Far too easy though. More! More!

Grab Factor 69%
N. Too difficult at first.
P. Free copy of Game Over on the flip side.

Staying Power 63%
P. Two parts to each of two games.
N. Not that difficult to complete with practice.

Overall 69%
P. Great value if you haven't got Game Over.
P. And still pretty good if you have.

Game Over was a fun shoot-'em-up, and this is a good game too.