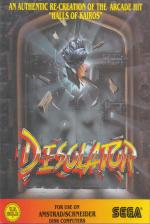 Mac is a hero and Kairos the bad guy Your task is to guide Mac through the Halls of Kairos to rescue the infants that have been imprisoned behind mirrors by Kairos.

The playing area is viewed from above and behind to give a simple 3D view As you move off the top of one screen the next flicks into sight. A panel to the right displays your score, energy lives and level. When you run out of energy you lose one of your five lives.

You wander the Halls of Kairos with nothing but your fists to defend you initially, though weapons can be collected to use against your foes. Collecting infants is accomplished by breaking with a well placed punch at the mirrors behind which they're imprisoned. A bonus for collecting infants is that after you're freed a certain amount you become Machoman (yes, really) and can then bash bad guys much more easily. Wandering around in the Halls you encounter minions of Kuiros who hamper your progress. They can be bashed with a punch or slain with one of the weapons.

There are several objects hanging on walls that can be punched to give the desired effect. A clock stops everyone from moving and a deer's head acts like a smart bomb. Ground-based objects include energy squares, jars and mines. Mines kill you and energy squares add to your energy total.

The loading tune is alright, but there are only short tunes in the game itself. Sound effects are loud and explosive. Animation of the figures is jerky, there are only two stages to the game and colour is not very cleverly used.

US Gold have been converting lots of arcade games to the CPC and in general they have done the job badly. There are occasions when a good conversion crops up. Desolator isn't one of them.

Visually, Desolator is very unappealing. Some features are like sparks in the dark and in conjunction with better action they could have made all the difference. As it is they're just wasted.

Grab Factor 54%
N. Uninspiring gameplay that neither begs you to play...
N. Nor send you screaming from the computer.

Staying Power 48%
P. Difficulty increases as you delve deeper in to the Halls.
N. Just the same old monsters to kill.

Just another badly done conversion of an arcade game.