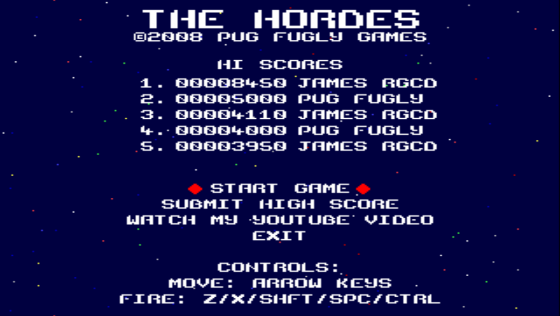 The latest shoot 'em up from the genius behind Destructivator.

Back in the (g)olden days of 16-bit home computing when the concept of 'shareware' was in it's infancy, bedroom coders would offer various incentives to encourage players to send them their tax-free cash in the mail. "If you like this game, send me £5 and a floppy disk, and in return I'll mail you back the full source code and another (undisclosed) free game!" was a popular one. Now, in my early teens I had no interest in spending my pocket money on a game I effectively already 'owned' (shareware programs were often distributed as full versions with just a registration reminder in the intro, unlike the crippled demos we see today) - but the incentive of receiving other releases from the same author was certainly tempting back in those pre-interweb years.

On the few occasions I did the honest thing and paid my registration fee, the freebie I received was more-often-than-not just a variation of the registered game coded using the same engine and sometimes even with the same graphics. And this is what leads me on to my review of Pug Fugly's 'The Hordes'; whilst playing it I was struck by a strong sense of déjà vu. Not only because it's uncannily similar in style to Pug's excellent Destructivator (also reviewed in this issue), but also because of the apathy felt when compared to its aforementioned bigger, bolder and brasher sibling. The Hordes looks like Destructivator, sounds like Destructivator and even smells like Destructivator, but when it comes to gameplay and design it's clearly the lesser of the two. However, The Hordes is still far from poor, and in short-bursts can prove to be a lot of fun.

It may look like a retro Galaga or Galaxian clone, but in actual fact the game-play in The Hordes is far more akin to the new-school breed of boss-rush shooters than that of Namco's vintage classics. The concept is simple; starting out with a puny laser cannon with which to combat the advancing aliens, your goal is to complete each wave by destroying the large alien boss (it's escort of smaller cannon-fodder opponents constantly replenish in number). Every boss you kill powers-up your weapon (double-shot, triple-shot, quad-shot, etc.), but also increases the size and difficulty of the next wave. Lose a life and your weapon is down-graded a notch and you return to the previous attack wave. Rinse and repeat until all your lives are lost, your aim being to beat the other entries on the (online) high score table. 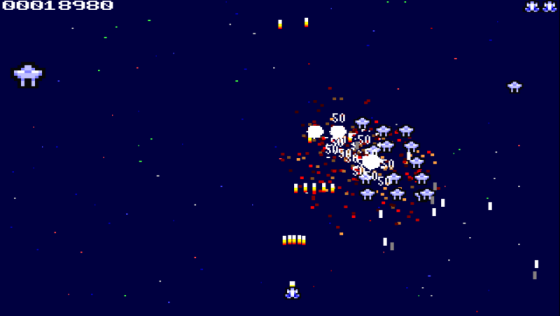 The in-game action is frenetic from the outset and at times there is so much flak flying in your direction that it feels as though you are playing a bullet-hell shooter. Unlike the relatively cautious insectoids of Galaga, the enemy drones don't care much for their original attack formation and instead prefer to launch themselves towards the player at breakneck speed, thereafter bouncing around the screen relentlessly firing off round after round of deadly plasma. Your primary target is of course the series of increasingly well defended boss aliens, and these can take a lot of punishment before finally succumbing to your firepower (whereas you burst into a shower of multi-coloured pixels after a single hit). The Hordes is a tough game in pretty much every respect, and thanks to its power-up mechanics even veteran shoot 'em up players are guaranteed a challenge.

So, what holds it back from a better score? Essentially just one thing; balance.

I've put a lot of play-time into The Hordes (because it's fun), but I can't help but feel that the start of the game is perhaps a little too difficult when compared to the stages immediately after it. Because it's so hard to score repeated hits on the first boss with your initial single-shot cannon it can take quite a while before you are awarded your first power-up, and as a result, by the time your ship is upgraded you'll be so adept at dodging bullets and cutting through the enemy waves that you'll be able to breeze through the second, third and fourth stages following it without any real effort. Also, the greater your ship is powered up, the less you have to actually aim your fire - so instead of playing it like a proper shoot 'em up you end up just holding down the fire button whilst you sweep left and right and attempt to avoid the incoming enemy shots. The concept of powering up and down used here is a good one, but nonetheless The Hordes really would benefit from a little bit of a tweak to make the first stage slightly less frustrating, and the later stages slightly more demanding. With a little more work The Hordes could be a brilliant shoot 'em up, instead of just being a really good one.

A tough game in pretty much every respect, and thanks to its power-up mechanics even veteran shoot 'em up players are guaranteed a challenge. 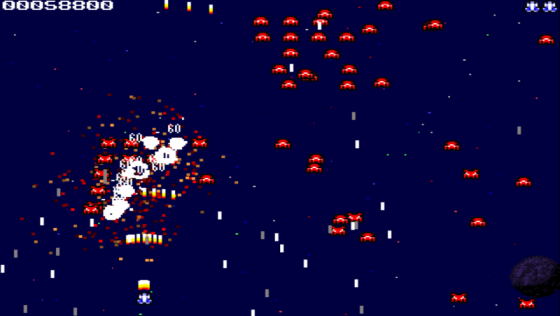 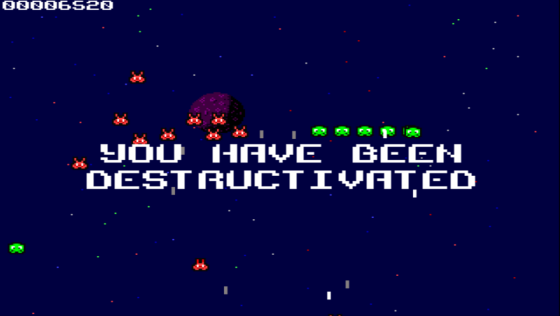