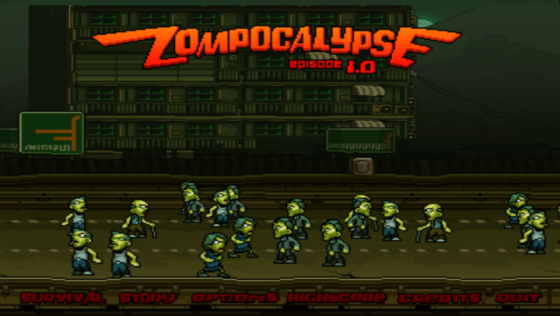 Zombie hordes. B-Movie dialogue. Metal Slug inspired visuals and vintage game-play lifted straight out of Smash TV. How could anyone not love Zompocalpse?

I've always had a massive soft spot for Metal Slug, going back to when my local leisure centre had a Metal Slug cabinet in the lobby, so any game in the same vein as Metal Slug is going to have to try pretty hard to let me down. It's an Achilles Heel I'm comfortable with declaring up front.

Enter Zompocalypse, where Metal Slug meets Narc and Duke Nukem, and the three of them go and get drunk and watch Dawn of the Dead. Then later they call in some hookers.

This first episode of the game only offers 'survival mode', but the presence of a 'story mode' option assures that there's more in the works, and the survival mode is plenty entertaining on its own. 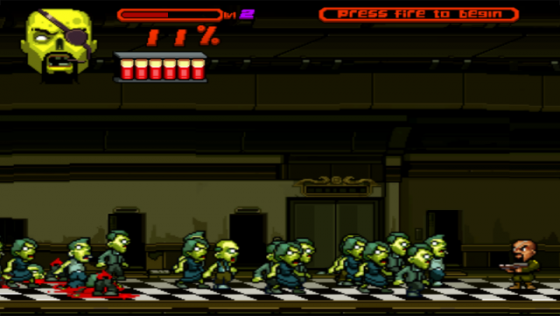 So, without further ado, you find yourself on a darkened street, quickly facing up to hordes of zombies, mainly elderly, and some looking just a little bit like Hitler. In true zombie movie fashion these shamblers are at their most dangerous when they swamp you, slowing your movement and giving you a good chewing. Little zombie babies (Zombabies? Sounds like some kind of deeply wrong kids' cartoon...) crawl around and produce weapon power-ups when kicked.

Just like Metal Slug, bonus weapons are dropped in crates from the sky, but the guns from on high aren't always an improvement on what you're already carrying. Moving from a machine gun to a single shot rifle, which in fairness is pretty powerful and useful in seeing off the terrifying zombie clowns, adds an extra level of difficulty, which isn't necessarily a bad thing.

Graphically, the game owes quite a lot to Metal Slug, and one of the two playable characters looks a lot like good old Duke Nukem, but unlike the vocal outbursts Duke spurts through Duke Nukem 3D, these two sluggers don't have the same turn of phrase. 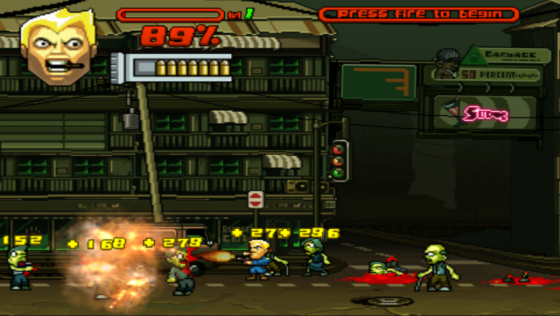 "You are f**kin' dumb!" springs to mind as one of the most redundant things to shout at a bunch of mindless zombies (my personal favourite is "Die zombie c**ksucker!". Definitely not a game for the kids - JM). Not that I have a problem with foul language, as anyone who lives with me will know, but if you're having your little guys mouth off, at least have them say something not-stupid.

But hey, it's a video game, not an opera, and in the greater scheme of things dumb dialogue is hardly a game-breaker.

Moving swiftly from sounds to sights, Zompocalypse's artwork is very nicely done, with spent cartridges falling from weapons, lift doors trying their best to close on zombie heads in the background, and the occasional lurid characters, like the zombie clown, set off the grimy, dark backgrounds perfectly. Realistic explosions just add to the intricacy of the graphics, and it's hard to not get the impression that a huge amount of effort went into making the game look great.

Altogether, Zompocalypse is a very satisfying zombie slugfest, a fun, bloody side-scroller with entertainment spilling out of it like burst zombie intestines. It'll be interesting to see what the future installments will bring...

Retailing at just under ten US dollars (you forgot to mention that Ruari!), I think that score given below is pretty fair; especially considering the game is currently lacking the much-awaited 'story' mode. Being a huge fan of both Metal Slug 3 and Robotron/Smash TV style games, I was probably one of the first people in the queue to buy a copy of Zompocalypse, but I cannot deny that although I was initially impressed the game does lack longevity with just the 'survival' game option.

However, following a few brief discussions with the Toadtrip development team (and nosing through the game's media files) it seems that there are a lot of plans to further expand the game in the coming months. With the game's production values being of such high quality (the use of different actors and dialogue for each character is especially impressive), I sincerely hope that Zompocalypse becomes a lucrative franchise for Toadtrip.

Although I was initially impressed, the game does lack longevity with just the 'survival' game option. 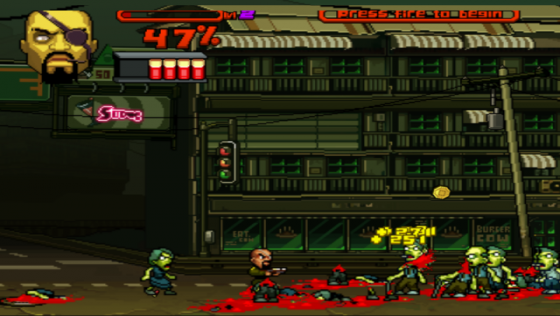