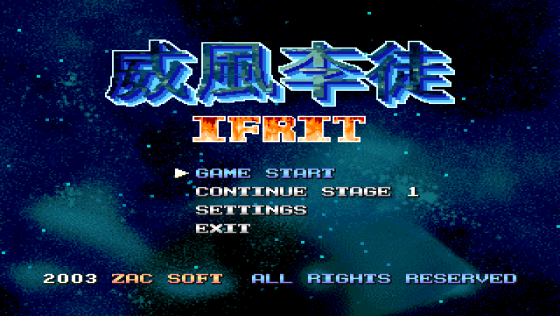 If there's one thing that can ruin a perfectly good shoot'em up, it's when environmental obstructions aren't implemented properly. By this I mean when enemy sprites and player shots can happily glide through what should be solid objects (such as asteroids), but if your craft so much as brushes against them its instant death. This is a real bug-bear of mine, and unfortunately a problem that I immediately encountered when playing this newly English-translated version of Ifrit. I've always been of the opinion that however unrealistic the genre itself may be, decent physics can really make a game stand out. My initial reaction on seeing my bullets fly through Ifrit's asteroids unobstructed was that they must be part of the background - and I nearly threw my competition pro joystick against the wall when I painfully discovered that this wasn't the case...

Although it's not a new game, the English patch is (and note that we've pre-applied it for the RGCD version). Originally released way back in 2003, the guys at Romhacking.net have recently translated ZacSoft's retro shooter, fixing the language barrier previously present in the game's menu system. Ifrit is a shamelessly retro horizontal shoot'em up, with classic 16-Bit style visuals and seriously old-school game mechanics (no power-ups or upgrades here). To set the tone of the game, here's the background story in full (as provided by Ifrit's 'Engrish' manual):

The alien (code name: "IFRIT") has made a surprise attack. But, the military strength which fights against us at them there is nothing. However, it participated in the war for "IFRIT" destruction of a certain fighter which received the SOS call which us sent. The fighter is outdated and weapon have only the beam which destroys an alien. 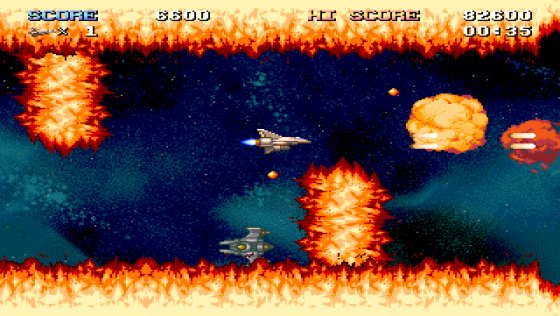 Can an intense enemy's attack be stopped by outdated weapon? And the pilot of the outdated fighter is you.

Riiiight... To be honest, my first impressions on playing the game were pretty lousy, but after spending several hours over the past few nights blasting Ifrit fighters out of the sky I'd be lying if I didn't admit to actually enjoying the experience, at least a little bit. Ifrit is a very simple little game, and that's undeniably its main strength. The game has three distinct stages (open space, a 'fire planet' complete with explosive flares, and finally the asteroid belt with its magic alien-friendly space rocks), each with it's own boss. Initially I was disappointed - Ifrit is very easy and it'll only take a few minutes to clear all three levels - but the lasting appeal and game-play are saved thanks to the inspired use of 'loops'; each time you complete the three stages the game loops back to the beginning, but with more aggressive aliens, more enemy types, deadlier bosses and more asteroids to avoid (arggh!).

This all sounds pretty standard for an old-school space shooter, but where Ifrit differs is in allowing the player to continue from the last completed stage (up to stage 25) - so after playing a few rounds you'll soon reach a level that suits and matches your playing ability. I'm not sure, but from what I could make of the manual I think that the final round is stage 30 (meaning 10 loops), so the game will provide even veteran players with a challenge.

Control is via joystick/pad or keyboard, and it all feels very smooth (albeit a bit slow to begin with). The lack of any collectable power-ups or 'last resort' smart-bombs maintains the classic pre-Gradius arcade feel of the game and it's automatic progress saving makes it ideal for short five-minute sessions when you need a break from work or 'more serious' gaming. However, it's far from being the best example of the genre and is undeniably a little rough around the edges (especially with regard to the lack of alien/bullet collision detection on those bloody asteroids and solar flares). With a bit more work and greater variation between the three main stages Ifrit could have been a freeware classic, but unfortunately its shortcomings result in the overall experience being no more than an enjoyable, short-lived distraction.

Boringly, I pretty much agree with everything James points out about the game. It's definitely enjoyable in short bursts but it does have very weak points. Firstly, creating only three levels and simply making them 'loop' and get progressively more challenging is a bit of a cop-out in my opinion. I would have much rather preferred the developer spend some more time creating around eight levels and then looping the whole game only once.

Also, as for the collisions, it's really quite frustrating and inexplicable. You can shoot over things such as asteroids, or the "explosive flares" but you can't fly over them. Hmm okay, I guess the enemies must have the same collision types with those obstacles as I do? Huh? The enemies can fly over the obstacles but can't shoot through them? What madness is this?!

I can only guess that these contradictory collisions must have been purposely added to add an element of role reversal and maybe show how the aliens differ from humankind, or some rubbish like that (I'll bet you a tenner that it's just sloppy programming though - JM)...

Like I say, I agree with James and the game is fun for what it is. I'm not sure how he could have forgotten to mention how rocking the music is though!

With a bit more work it could have been a freeware classic, but unfortunately its shortcomings result in the overall experience being no more than an enjoyable, short-lived distraction. 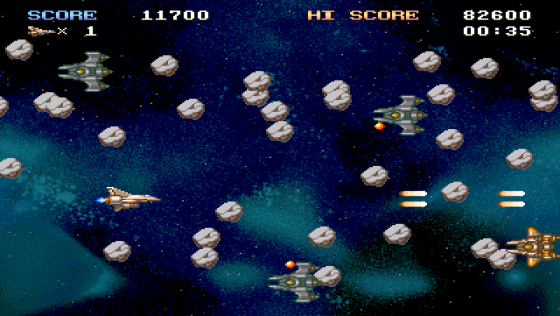 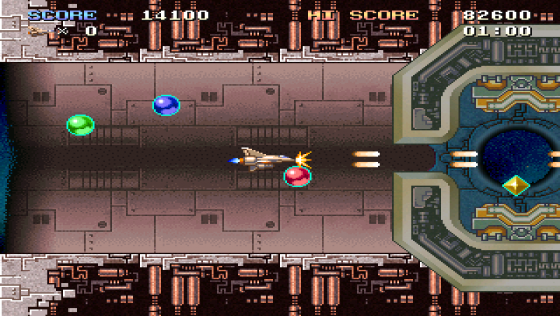