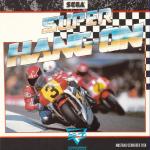 Arcades across the country have part of a motorbike sticking out of a games machine. The part that's sticking out is the seat and handlebars and people are often seen sitting on it as the bike rocks from side to side. The sound of motorbike engines roar through the speakers on either side of the game. That very game has made its way to a micro near you, but the cassette box unfortunately doesn't have the bike in with it.

This game is more or less Pole Position on a motorbike, and as far as objectives go you must simply reach a checkpoint within the time limit. You've got to go as fast as possible without hitting any other riders or the inconveniently positioned rocks, trees and signposts that litter the road sides. It's tough and a crash can be enough to make you fail to qualify.

Four gruelling cross continent races are yours to play, ranging from 6 stages in Africa to 18 stages in Europe. When you complete a stage the time that you had left has half a minute added to it and play continues until the race ends or you run out of time.

Graphically it looks like it was programmed on a Spectrum and ported across to the Amstrad without any conversion effort. As a result there is little colour and it looks a lot like Enduro Racer. A truly horrendous tune plays at the start of the game and you can't exit it to put your ears out of their misery. In-game effects are of a similar low standard.

The arcade game had fantastic graphics and sound; not surprisingly the 8-bit micros like the humble Amstrad just can't convert the game properly. The game as it stands is good, but anyone expecting the arcade game is going to be very disappointed.

There's no doubt that Super Hang-On is playable and addictive, and there are an awful lot of stages to keep you going. In that sense it's a cracking game.

What is extremely annoying is that this has just been ported across from another machine and no effort at all has been put into using the CPC's qualities. You may not think that's important if it plays OK, but if it had been properly converted, maybe we would have had a great game instead of just an adequate one.

Very little colour so there are no problems in green.

Staying Power 62%
P. Four continents of increasing length to complete.
N. The way that bikes sometimes leap in front of you is irritating.

Pathetic lack of colour - even has attribute clash! - plus hideous music and horrid sound effects. Yet still surprisingly playable and addictive!