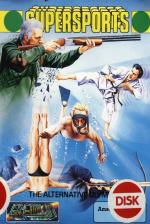 The first of Gremlin's sporting compilations this month is subtitled "the Alternative Olympics". There are five unusual events to go through and from one to four players can take part.

Crack shot is a target shoot game in which you have a time limit to shoot as many things as possible. Shoot a cat, though, and you lose points rather than gain them (a pity: it's fun watching them jump in the air).

Stunt diving is next. In this you climb steps up a diving board and press fire when you're at the height that you want to dive from - the higher you are, the smaller the pool appears to be. Points are awarded for stunts you do on the way down and how well you stay over the pool. The higher that you dive from, the more stunts you can do.

In the slate smash you have a time limit in which to smash as many slates as possible in true karate style. Two men hold the slates and you have to punch or kick them to bits (the slates, not the men!). You have 90 seconds to fire six crossbow bolts as accurately as possible in the next event and the last one is an underwater assault course.

The graphics are colourful and well animated with plenty of detail. Sound effects are of a similar standard and there are some good tunes too.

There are many sporting simulations on the market now and they all have loads of events to play through. This one has only five events and they're not particularly difficult to complete. You may find enough to occupy you for a few days, but after that?

If you're crazy about sport sims you may be seeking this out, but for the rest of us there's not too much to get excited about here.

The screen in green
is clearly seen.

Grab Factor 62%
P. Best bit is shooting cats, and you lose points for that.
N. The instructions leave a little to be desired.

Staying Power 53%
N. No long term challenge, unless you play against another player.
N. Only five different events.

Sports sims freaks only. There's no long term challenge, unless you play against another player.