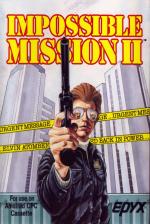 Elvin Atombender is back to bring death and destruction to the world. A very large missile is due to be launched in three hours time and anything in the vicinity of the planet, earth will die. Since there are no scheduled flights off the planet for a while you're left with no choice, but to be heroic and save the world.

Initially, it looks very similar to its predecessor, Impossible Mission. There's a side-on view of elevators and robot-infested rooms. However, the game has been changed considerably so that it provides new challenges to veteran Impossible Mission players.

Elvin's lair is made up of many towers that each have several rooms. The rooms contain a mixed assortment of furniture and plenty of hostile robots that work for Elvin. Searching the furniture will provide one of the following: a number, a bomb, a command icon or nothing. The numbers are used to crack the security codes of the building, a three digit code is needed to enter a tower. Command icons come in several varieties: robot off, reset lift, move floor or extra time.

Surprisingly enough, the robot off command temporarily deactivates all of the robots and the reset lift option puts all of the lifts back in their start-up positions. Some parts of rooms can slide horizontally and they're moved with the move floor icon. Extra time extends the amount of time that you have to complete the game. There are two types of bomb: normal and time. The former is used to blast open a safe and the latter to blow holes in the floor. Inside the safe you will find a tape recording, more of that later.

Inside the rooms, you will also find Elvin's robots which come in six different forms: sentrybots, minebots, pestbots, squatbots, bashbot and suicide-bots. Sentrybots are armed with high voltage plasma guns that fry you if you're hit. They aren't very manoeuverable though, so they can be somersaulted over quite easily. Minebots wander around, leaving little messages all over the place, if you step on one of their explosive deposits you'll get blown up.

In most rooms, there are lifts and the cute little pestbots have the annoying habit of playing on the lifts that you've so carefully positioned. Squatbots are small spring-loaded robots that you can use to propel yourself upwards in an extra large leap. Stand on them too long though and they'll bash you into the roof. The bulldozer-like bashbots will grab you and then shove you off the edge of a platform, which can be fatal. The suicide-bot leaps to its death and tries to take you with it.

In the corridor and lift section, you just run around trying to find rooms. During this part of the game you can try and crack the code to enter another tower, or play back any recordings that you've made. The recordings are needed to get into Elvin's central tower, your main objective. Once in the central tower, you have to find the right terminal in Elvin's control room and deactivate the missile.

Sound is limited to running, jumping and dying and there are no tunes. The graphics are colourful and well-animated, but they're nothing spectacular.

There are some very mean problems to solve in this and lots of towers to go through. There's little variation in playing style from room to room and tower to tower, but the problems do get tougher. If you liked Impossible Mission then you'll love this and if you didn't then give this a look anyway. One final thing, it's a multi-load game.

Graphics 76%
P. Colourful scenery and sprites.
N. The characters are a little small.

Grab Factor 86%
P. Once you've grasped what to do, it's great fun to play.
N. The mixture of searching and puzzling is just right.

Staying Power 85%
P. Plenty of towers to complete and defeating Elvin will take quite a while.
N. After a few games you may get bored doing the same thing over and over.

Overall 85%
P. A worthy follow up to Impossible Mission.

If you liked Impossible Mission then you'll love this and if you didn't then give this a look anyway. One thing though: it's a multi-load game.